Amid ongoing fighting between Azerbaijan and Armenia, Georgia has suspended the transit of military cargo through its territory to either country either by land or air. No restrictions apply to transit of civilian goods and other cargo.

The National Security Council of Georgia, an eight-member advisory body responsible for national security policy planning and coordination, announced after a meeting earlier today that Tbilisi observes all of its international obligations.

It also said that that the ‘intensity of freight transport is high and it has not changed since the resumption of the armed conflict’ between the two neighbours. 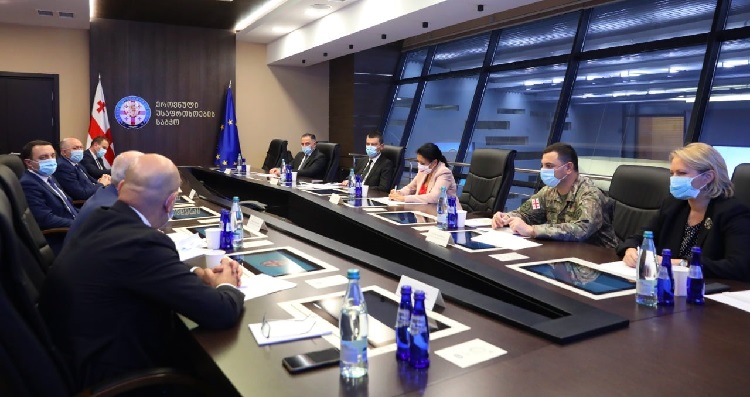 The National Security Council is chaired by the prime minister. Its other members are: interior, defence, foreign and finance ministers, heads of state security and intelligence services and chief of the armed forces. Photo: Government of Georgia/Facebook

Georgian officials, including Prime Minister Giorgi Gakharia, who chairs the council and President Salome Zurabishvili, have called on the Co-Chairs of the OSCE Minsk Group and other international actors, ‘to take all necessary measures to stop the violence and resume dialogue’ between Armenia and Azerbaijan.

Georgia enjoys good neighbourly relations with Azerbaijan and Armenia. We seek to maintain and further strengthen these relations”, the council’s statement reads.

The Georgian officials once again reaffirmed their readiness to contribute, in any form, to the de-escalation of tension, including by facilitating a dialogue and hosting a meeting of Armenian and Azerbaijani officials in Tbilisi.

On behalf of the Georgian people, I send my deepest condolences for the losses that have been made in this conflict between our two friends and neighbors.

I call on the authorities in both countries to resume dialogue and to work toward deescalation and a ceasefire.

She also called on the European Union to 'use its force for peace'.

I want to address the European Union. Georgia, Armenia, Azerbaijan are all members of the #EasternPartnership. If that means anything, which I’m sure it does, our regional stability and peace is in Europe’s highest interest. Europe must use its force for peace and deescalation.

Hostilities between the two neighbouring countries of Armenia and Azerbaijan over the disputed region of Nagorno-Karabakh resumed last week.

PM Gakharia has stated earlier as well that ‘it is in our common interest for peace to be restored in the region as quickly as possible'.