A retrospective on Soviet-era avant-garde filmmakers and their legacy at Paris’ famed Centre Pompidou is celebrating two Georgian-born directors and their works of the early 1930s this week.

Mikhail Kalatozov and Kote Mikaberidze, two major figures of Soviet Georgian cinema, are part of a 2019 cinema programme at the venue that launched in January and will conclude later this month.

Within Red. Soviet Cinema and Avant-Garde, the two artists will be introduced to film-goers by researchers who have studied their role in the avant-garde of the earlier years of the Soviet system.

Bringing together five filmmakers linked to Soviet avant-garde art, this panorama outlines the contours of a cinematography at the crossroads of theories aesthetic and revolutionary,” author of the programme Valerie Pozner said.

The screenings at Centre Pompidou fall within the venue’s programme on Soviet art and history:

Pozner also said in preview of the screenings the cycle was designed to “rethink the Soviet production in the world evolutions of the cinema”.

Within this programme, Oksana Bulgakowa, professor of film studies at the Johannes Gutenberg University, will introduce the 1930 documentary Salt for Svanetia by Georgian-born filmmaker Mikhail Kalatozov on Thursday.

The film was born after Kalatozov (born Mikheil Kalatozishvili) travelled to Svaneti, Georgia’s remote highland province, in 1929 to document the life and customs of a community effectively cut off from outside world in daily activities.

Shedding light on the lack of access to resources and shortage of salt experienced by the locals, the silent black-and-white work was filmed in the Ushguli community of four villages, now a UNESCO World Heritage Site.

Accused of formalism by censorship, Kalatozov completely reworked his fiction into an ethnological and poetic documentary [in] Salt for Svanetia,” a preview for the screening noted.

Two days later, Soso Dumbadze, Cologne-based Georgian artist and researcher, will speak about the legacy of Kote Mikaberidze, a pioneering filmmaker and director of the celebrated 1929 silent film My Grandmother. 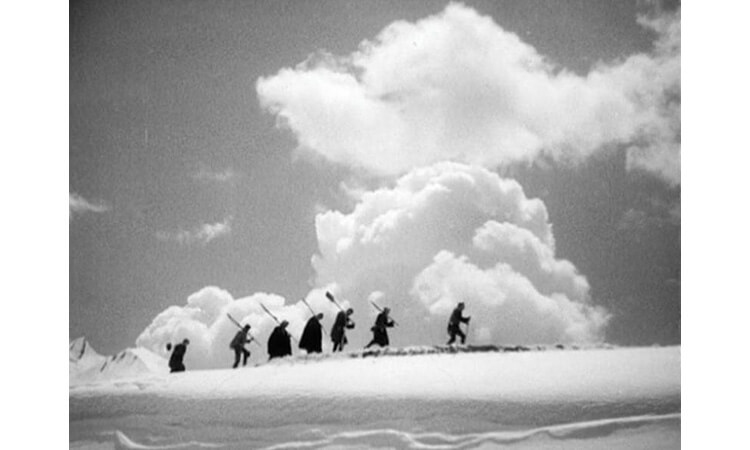 Mikhail Kalatozov’s 1930-directed ‘Salt for Svanetia’ will be screened on Thursday. Image: D.R.

Influenced by German expressionism, constructivism, the French avant-garde and surrealism, this caustic satire reflects with irreverence the turpitude of its time and bureaucracy.”

Mikaberidze's first feature film portrays a conscientious civil servant who, condemned to wandering after the loss of his job, finds effective protection from a ‘grandmother’,” — Centre Pompidou.

Mikaberidze directed less than 10 films between 1929-1941 and featured as actor in fewer than a dozen, however his work is celebrated for significant contribution to the Soviet Georgian cinema, including silent film.

Despite a 1929 ban on his film debut, the director was recognised even by Soviet authorities later in his career, receiving the state title of Honoured Artist in 1945.

His legacy has also been celebrated in contemporary Georgia, through an exhibition at Tbilisi’s National Archives venue in 2017. My Grandmother has also been screened at events dedicated to Georgian cinema at Brussels' BOZAR Centre of Fine Arts this year and at the 2018 Frankfurt Book Fair.

Film work by Kalatozov has also been showcased at cinema events in recent years, with his 1957 classic The Cranes Are Flying screened at last year’s Berlinale Film Festival.