German President Frank-Walter Steinmeier, who has met with Georgian Catholics Patriarch  Ilia II while on his first official visit to Georgia in the role, has said that the Georgian government is looking for ways to peacefully settle conflicts, adding that achieving the goal will be difficult without the “active involvement of Russia,” the Georgian Public Broadcaster reports.

I visited Georgia for the first time back in July 2008 to find ways to avoid escalation. However, we failed to do so [the Russia-Georgia war took place in a month's time, in early August]. I know that the Georgian government is looking for diplomatic ways to resolve conflicts, and of course, Russia as the other party should be involved. Such involvement is inevitable,” Steinmeier said.

Steinmeier stated that tomorrow he will visit a village at the occupation line to see what is going on at the scene for himself. 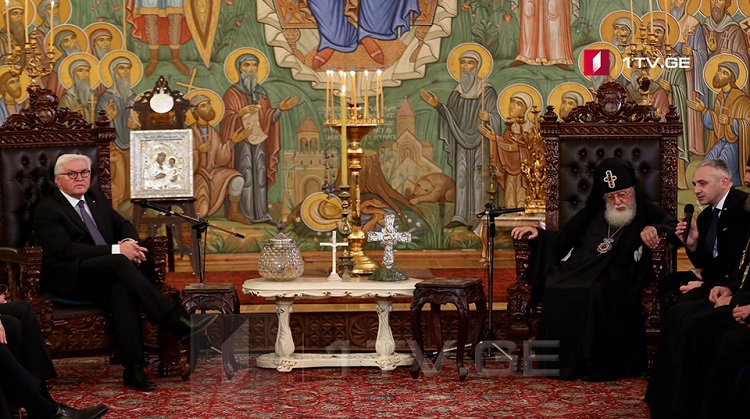 Georgian Catholics Patriarch Ilia II told Steinmeier that Georgia has positive expectations from his visit, adding that Georgian lands are occupied by Russia and the occupation creates problems also for Russia. Photo: 1TV.

Even without the visit I know the situation well. The erection of fences [by occupying forces] equally affects the people living in and near the so-called borders,” Steinmeier said.

He stated that Georgia has shown “stunning progress,” signing the Association Agreement with the EU, a visa-free deal and the Deep and Comprehensive Free Trade Area deal.

Steinmeier arrived in Georgia with his wife, and has already held meetings with the Georgian president, PM and parliament speaker.