The central Georgian government has confirmed that a ‘police post’ opened by occupying forces  near the village of Tsnelisi, Kareli Municipality, is on Tbilisi-administered territory.

The confirmation came after today’s meeting in the village of Ergneti between the members of the central Georgian government and the de facto leadership of the Russian-occupied Tskhinvali region.

The Georgian Foreign Ministry has condemned the opening of the post, saying that the occupying forces are trying to make Georgia demark the territory, “which will never happen.”

The actions [of the occupying forces] further strain the situation on the ground and undermine the intentions for peace by Tbilisi and the international community,” the statement reads.

The ministry reports that the EUMM  to Georgia, members of the Geneva Discussions and the OSCE have been informed regarding the illegality.

The de facto security committee of Tskhinvali posted the photos of the ‘new police checkpoint” yesterday on its  Facebook page, writing that the road is being built to post.

The left part, in a brighter colour, is the Tbilisi-administered territory, with a small red circle on it depicting the post opened by the occupying forces. The right, darker part of the picture is the occupied territory.  Photo: Infoarm.ge.

They said that the post was opened in response to the construction of a new police checkpoint by Tbilisi in the village of Chorchana, Khashuri municipality, at the end of August, which ‘increased security threats.’

Information was released earlier yesterday that the post put up by occupying forces was on Tbilisi-administered territory.

Head of the State Security Service Vakhtang Gomelauri said that the information was being checked.

Deputy Head of the Analytical Department of the Georgian State Security Service Irakli Antandze said that the meeting today, which was held to deescalate the situation on the ground and address the ‘new checkpoint opened by Tskhinvali,’ yelled no results. 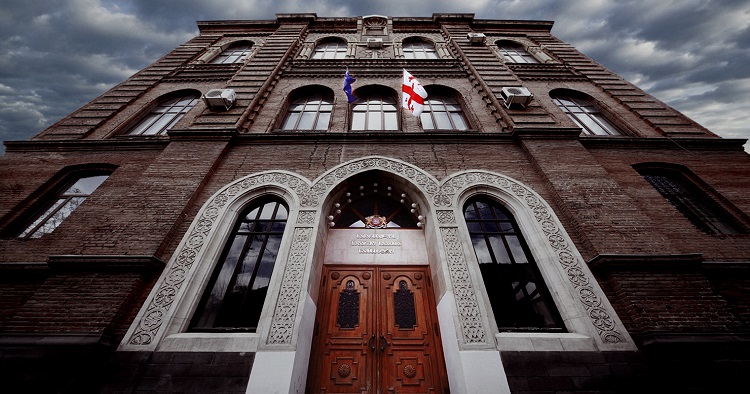 On August 29 Tskhinvali demanded the Georgian checkpoint in Chorchana be dismantled and left the Incident Prevention and Response Mechanism meeting in protest, citing ‘security threats’ created by the new checkpoint as the reason.

Tbilisi refused to dismantle the checkpoint and stated that talks will continue with the de facto leadership to ease tension on the ground.

Tskhinvali said that they would build ‘their checkpoint” in Tsnelisi, which is bordering Chorchana “to defend locals.”