Georgia’s armed forces now boast the first unit trained within their "most ambitious program”, as officials and military commanders celebrated the graduation of the first battalion of the Georgia Defence Readiness Program earlier today.

Service members of the IV Mechanised Brigade, 43rd Battalion have the honour to lead the roster of units to undergo preparation of the joint Georgian-US program launched in May and projected to run through 2021.

Assessed by staff of the Georgia-based Combat Training Centre and around 30 observers from the United States armed forces, the battalion’s troops were subjected to a 13-week "intensive training” in various aspects of command and combat elements. 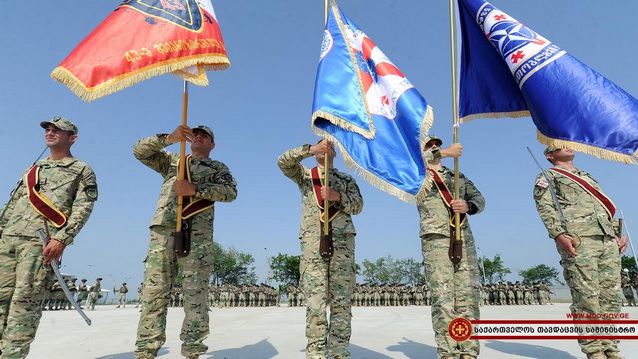 A major part of their training was held on the grounds of the CTC at Vaziani Training Area on the outskirts of Tbilisi and involved drills in maneuvering, fire and reconnaissance elements, force protection, command and control as well as containment operations.

To deal with objectives of the preparation the battalion was also equipped with "individual and collective” armament of NATO standards.

Personnel of the unit was awarded at Wednesday’s graduation ceremony, where they were addressed by the Minister of Defence of Georgia Levan Izoria.

Beside the Vaziani training grounds the troops also underwent preparation at Camp Norio area just outside the capital city. 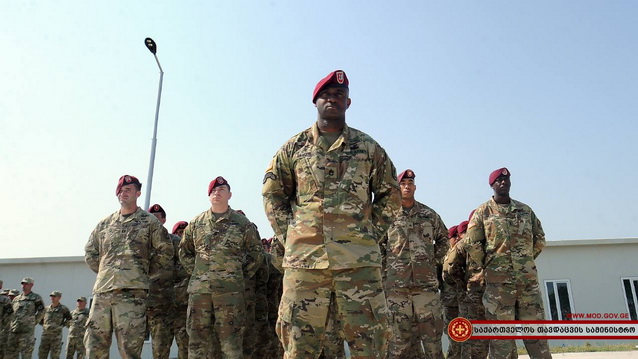 Personnel from the US Army photographed at the event. Photo: Georgia’s Defence Ministry press office.

The GDRP is a joint project of the Ministry of Defence of Georgia and the US Department of Defence and aims to improve combat readiness of Georgian service members for territorial defence of the country.

Nine battalions are projected to undergo the program which includes manning, training and equipping the units over the next three years.

Izoria called it "the most ambitious program in the history of the Georgian Armed Forces” at its launch.

Its first phase will be supervised by American instructors, with their Georgian counterparts taking over from 2020.