Georgia will host the largest edition of the annual Noble Partner defence exercise with its European and regional partners later this year with troops from 11 countries joining forces for the training.

Uniting under the banner of the exercise’s motto Strength Through Partnership, service members from Georgia, the United States, the United Kingdom, Germany, Spain, Ukraine, Turkey, Romania, Slovenia, Armenia and Azerbaijan will participate in the drills taking place in July.

The Ministry of Defence of Georgia announced last week the exercise would be used to improve the country’s defence capabilities and further develop the Georgian Armed Forces’ interoperability with troops of NATO- and partner countries.

The ministry said a principal planning conference for the event had brought together Georgian Armed Forces officers and their foreign colleagues in a week-long program of meetings last week.

The conference was used by participants to agree major preparations for the upcoming drills. During the event held at the Vaziani Training Area outside Tbilisi, the participating professionals agreed on "locations, exact number of troops” and logistical matters for the exercise. 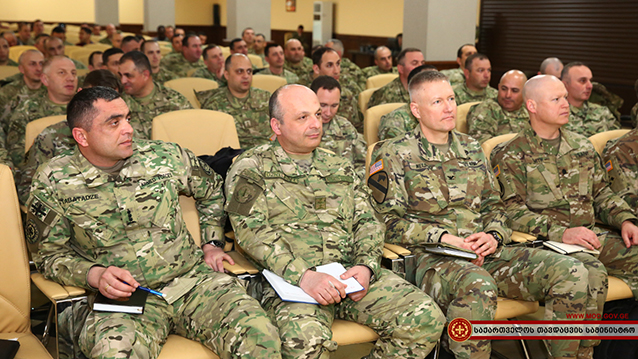 A preliminary conference involving planners from the partnering countries was held in Georgia last week. Photo: Ministry of Defence of Georgia's press office.

A final conference for finalising all the details of the event will be held in Georgia in May before the drills launch in July, said the Defence Ministry.

Established in 2015, the Noble Partner exercise was initially founded to train service members from the Georgian Armed Forces and NATO member states for the NATO Response Force (NRF) unit and to improve the Georgian troops’ interoperability with NATO units.

Last year's drills involved around 1,300 service members including 650 US, 500 Georgian and 150 UK personnel at the Vaziani training ground.