The up-and-coming artist impressed the jury of the 16th edition of the event that wrapped up on March 5 in town of Cergy-Pontoise, northwest of Paris.

Kipiani was earlier selected as one of the three finalists to compete for the ultimate honours on Sunday.

While the Georgian pianist finished behind China’s Hin-Yat Tsang in the contest for the Gold Piano Campus prize, she still took the Silver Piano Campus ahead of Cadmiel Botac of Romania.

And the young artist collected six of the ten remaining prizes at the event, including the audience prize and the award from the French Society of Music Authors, Composers and Editors (SACEM).

The full list of additional prizes and their recipients is below:

The Sunday final featured three finalists performing a piece for piano and orchestra by guest composer Aurelien Dumont as well as the First Movement of the Concerto in A Minor Opus 54 by Robert Schumann.

The performances were followed by voting from the judges and the public, with results announced afterwards. 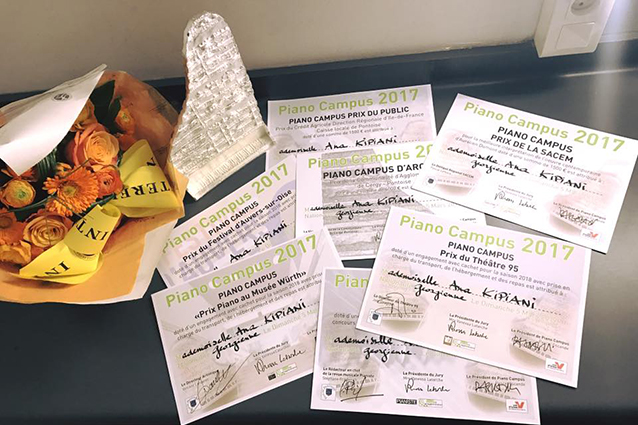 The annual festival is open to pianists from across the world aged 16-25. The event is promoted as "a springboard for young artists ... to start an international career”.

Kipiani is studying at the Moscow State Tchaikovsky Conservatory under the famous Georgian pianist and professor Eliso Virsaladze.

The up-and-coming artist has already performed at various international venues including the Amsterdam Royal Concertgebouw in the Netherlands and performed alongside bands including the Vilnius Philharmonic Orchestra in Lithuania.