Emerging piano talent Giorgi Gigashvili was crowned the winner of the International Piano Competition ‘City of Vigo’ in Spain on the weekend, after the youngest participant of the contest impressed judges led by famed Martha Argerich.

Gigashvili, student of Tbilisi’s Zakaria Paliashvili Central Music School, was announced as the recipient of the First Prize for the third edition of the competition named after Argerich, recognised as one of the greatest classical pianists of all time.

The Argentinian chair of the jury was on stage at the Martin Codax Hall of the Superior Music Conservatory of Vigo, following the contest’s final round, to congratulate the young performer on his result.

Gigashvili was awarded at a ceremony involving judges chaired by Argerich:

Gigashvili earned the judges’ assessments following his performances of the Chorale Prelude in G minor by Johann Sebastian Bach and Ferruccio Busoni, in addition to the Etude-Tableau Op.39 by Sergei Rachmaninoff and the Sonata No.7 by Sergei Prokofiev.

Securing the principal award of the contest, Gigashvili left the event with another recognition — the Nelson Freire Prize, named after another jury member and internationally recognised pianist.

Beside Argerich and Freire, the jury panel also involved pianists Pablo Galdo, Sergio Tiempo and Tamas Vasary, bringing various perspectives to the assessment of the contestants.

The competition saw five finalists selected for the ultimate round, narrowed down from a wider selection in the semifinal and the first round. 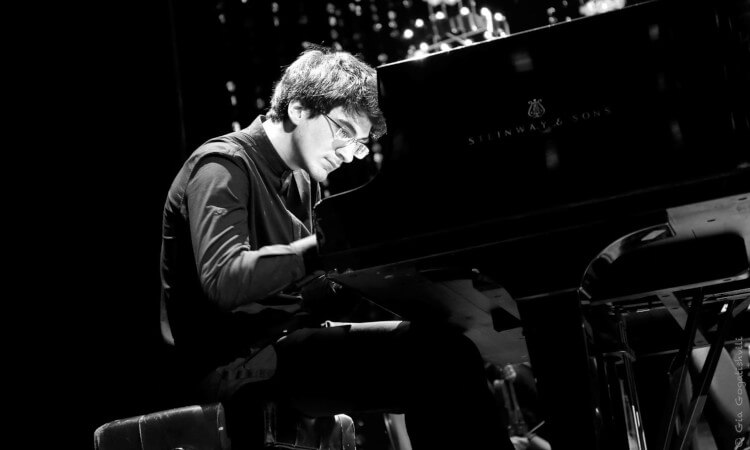 The young artist emerged from the Vigo competition with two awards highlighting his work with his mentor, professor Revaz Tavadze. Photo: Gia Gogatishvili.

Nearly 100 entries were accepted from a pool of around 400 who entered the Vigo event.

Results of the competition have seen Gigashvili also claim a money prize, along with an opportunity to hold concert performances in New York, Sao Paulo and a number of Spanish cities.

The two awards received by the Georgian also serve to highlight his work under the mentorship of Revaz Tavadze, a professor at the piano department of the Tbilisi State Conservatoire.

Gigashvili has performed at contests including the Tbilisi International Piano Competition and events including chamber concerts at the conservatoire.