Works of art created by Georgian visual artist Levan Songulashvili went on display at the annual Tribeca Ball 2016, hosted at the prestigious New York Academy of Art in the United States (US) this week.

His creations were part of a display of student pieces at the celebrated venue on Monday. A number of original works, prints and other pieces by master's degree students and New York Academy of Art members were part of the exhibition.

Actor and model Brooke Shields - who missed out on buying Songulashvili's work at last year's Tribeca Ball - this time received one of his 2014 works as a gift. 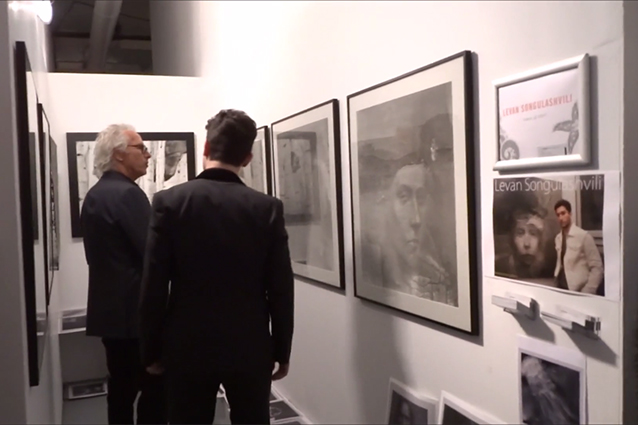 Creations by Levan Songulashvili were displayed at the Tribeca Ball 2016 in New York, US this week. Screenshot from video of the display.

Earlier this year Songulashvili was selected among 21 artists to create a nude portrait of American rock music pioneer Iggy Pop. The creative project was the result of collaboration between the Brooklyn Museum of Art and British conceptual artist Jeremy Deller, and held on February 21.

The group of contemporary artists, aged 19 to 80, worked to create their vision of the rock muse. The results of their efforts will be exhibited at the Brooklyn Museum of New York later this year before being put on display at various other galleries and museums across the US.

Songulashvili, now based in NY, graduated from the Tbilisi State Academy of Arts in 2013 before he won a scholarship award from Georgia's Education and Science Ministry while studying for his master's degree.

In 2014 he left for the US and continued his master’s studies at the New York Academy of Art. There he was awarded the Scholar Merit Award, which was founded by the famous 20th Century artist Andy Warhol.

In 2015 he won the Academy’s prestigious Portrait Scholarship Award, becoming the first Georgian artist to do so. Last year his works also featured at the Academy’s annual Tribeca Ball.