One million customers supplied with natural gas in Georgia

Natural gas is now available to one million people in Georgia thanks to the Government’s efforts to ensure everyone in the country has reliable access to gas.

Today Georgia’s Prime Minister Giorgi Kvirikashvili and SOCAR president Rovnag Abdullayev visited a small village in western Adjara to watch as the one millionth client was connected with natural gas.

The family of Mamuka Makharadze, who live in Khutsubani Village in Georgia’s west, were the one millionth family who is now connected to the gas network.

At the Makharadze home, PM Kvirikashvili lit a gas stove and celebrated the occasion.

Providing natural gas and a reliable water supply is the top priority of our Government. This is important also for preserving the environment because it means forests will not be cut down,” said Kvirikashvili.

As of today more than 66,821 families are connected to the gas network in Adjara region. SOCAR Georgia planned to supply a further 9,000 families with natural gas in the region in the future, said the PM. 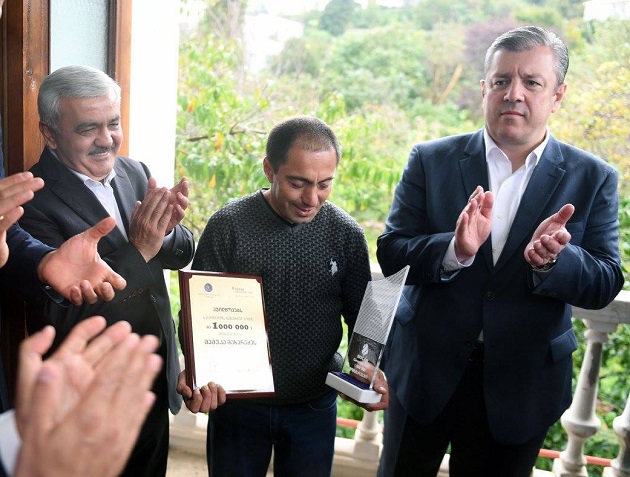 A diploma and an award was given to Mamuka Makharadze (C), the millionth customer to enjoy the natural gas in Georgia. Photo by Georgia's Ministry of Energy.

Improving the water supply system in Adjara was another focus of the Government, announced Kvirikashvili today.

We have projects designed to develop the water supply systems and aim to equip the whole Adjara region including its high mountainous areas with modern infrastructure. This way we will create a modern, comfortable living environment for each and every Adjarian family,” he said.

While talking about the region’s infrastructural development Kvirikashvili said construction of the Khulo-Adigeni road section would begin "in the nearest future” to improve the road quality. He said the new road from Batumi to Khulo will meet top European standards.

Meanwhile SOCAR will continue connecting gas to villages and towns all over Georgia.

The company planned build a 360km pipeline and supply 8,935 Georgian families with natural gas by the end of 2017.

In March this year Georgia and SOCAR signed a deal that stated Georgia would receive an additional 500 million m3 of natural gas from SOCAR until 2030, bringing the amount it received from 800 million to 1.3 billion m3 per year.