Made in Georgia will soon be printed on labels on the inside of jackets that are sold in France.

A new clothing factory opened yesterday in Georgia where 100 percent of its products will be exported.

Fitted with the latest technologies, modern and high quality sewing and knitting machines, clothing made at Geo-M-Tex will have the Made in Georgia label and be exported abroad.

Just over 300 people are employed at the factory, which also offers training courses for people interesting in becoming a tailor.

A new clothing factory opened yesterday in Georgia where 100 percent of its products will be exported. Photo by Enterprise Georgia.

The future plans that Geo-M-Tex has are exciting. By the end of this year 500 people will be employed at the company,” said Georgia’s Economy Minister Dimitry Kumsishvili at yesterday’s factory opening.

The garment factory has already started negotiations with several leading European companies who will import the new Georgia-made jackets.

French apparel manufacturer and lifestyle brand, Moncler, confirmed a partnership with Geo-M-Tex and will be the first to import the new jackets.

The clothing factory is located in the outskirts of capital Tbilisi. It opened within the state program ‘Produce in Georgia’ and a total of $3 million USD was invested in the new business. 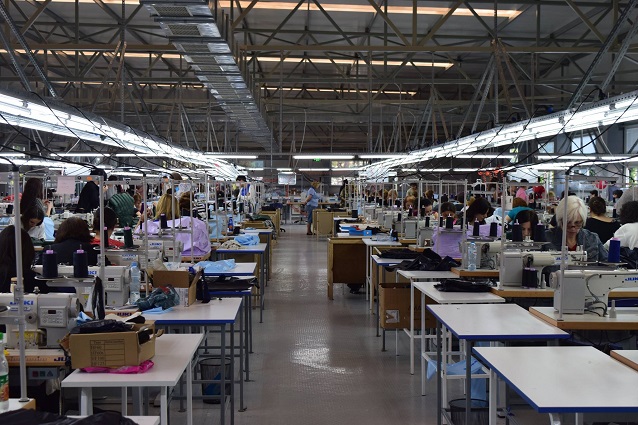 New clothing factory is located in the outskirts of capital Tbilisi. Photo by Enterprise Georgia.

Silk Road Investment Group has already signed a deal with Georgia’s state-owned shareholding company the Partnership Fund agreeing to terms and conditions of the new factory.