Today is a big day in Georgia. The country is proudly and boisterously celebrating the 97th anniversary of the day it declared its national independence.

May 26 is one of Georgia’s major public holidays and marks the day when the country declared national independence of the Georgian people from Russia and the creation of the Democratic Republic of Georgia in 1918.

A major public celebration will take place in the Georgian capital Tbilisi and in 12 other self-governing cities of Georgia.

All people: Georgian residents and foreign guests, the young and the old, are invited to join the celebrations and are promised they will enjoy themselves.

Authorities including Prime Minister Irakli Garibashvili and all members of the Cabinet will join the public celebration on the main street of the Georgian capital city.

All Ministries and Governmental agencies will present their offices to people in small stalls on Rustaveli Ave. 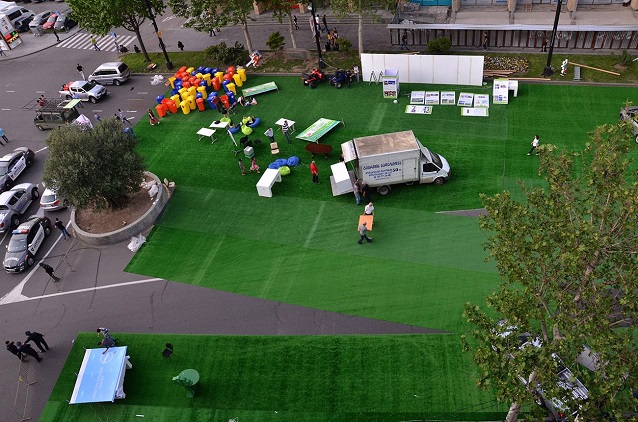 The Ministry of Environment protection is restoring a piece of nature at the main avenue of Tbilisi. Photo by Ministry’s press office.

The agencies will present several services they provide. For example, the Health Ministry will offer citizens a free Hepatitis C test, while the Finance Ministry will let people plan the country’s budget on their own.

Even the artificial snow will be presented on the Rustaveli avenue while the weather forecast for Tbilisi is 79F/26C.

The celebration is starting at 11pm and will peak at 9pm, when the gala concert and fireworks are planned to take place in front of the Parliament building in Tbilisi. But before this, theatrical performances, folk music and dances and sporting competitions will entertain citizens throughout the day. 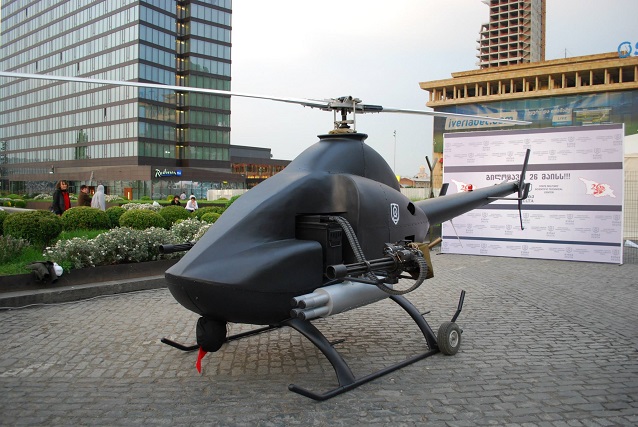 This project of unmanned aerial vehicle presented by the State Military Scientific Centre Delta became the "star” of the day as soon as this photo had appeared in the social media. Photo by Delta’s press office.

At 1pm in Tbilisi an important ceremony will be held at Freedom Square where 200 new recruits will take an oath before the President of Georgia, as Commander of the Georgian Armed Forces.

The ceremony will also be attended by American military servants as a sign of the firm friendship between Georgia and the United States (US).

The celebrations will continue along nearby Rustaveli Ave, where stalls will line the street and vendors will showcase their goods. Guests can also enjoy a festival of flowers and a military equipment exhibition. Similar military exhibitions will be held around the country.

Although Georgia’s Independence Day is on May 26, the country has already received greetings and congratulations from abroad, which included letters from US President Barack Obama, Estonian Prime Minister Taavi Roivas and the Prime Minister of Greece Alexis Tsipras. Linas Linkevicius, Lithuania’s Minister of Foreign Affairs shared his congratulations on his official Twitter account:

Happy Independence Day to the people of #Georgia! We will always stand by you, born to be free, future members of the Euro-Atlantic family!

On May 26 in 1918, the National Council of Georgia declared national independence of the Georgian people from Russia and the creation of the Democratic Republic of Georgia.

On that day the statehood of Georgia was restored after 117 years. The country remained independent for three years until Soviet occupation in 1921. Georgia declared independence from the USSR finally on April 9, 1991.

Several streets in central Tbilisi have already been closed to all vehicles to prepare for the event.

Tbilisi City Hall earlier warned drivers Rustaveli Ave would be closed on May 25 and 26.

On these two days people who want to drive from Rustaveli Metro towards Freedom Square will have to drive along Mikheil Javakhishvili St (former Elbakidze slope), the right embankment and along Baratashvili St.

Traffic movement will also be restricted at Orbaliani Square and the last stop of mini buses will be on Atoneli St.

From 4pm to 9pm tomorrow, traffic movement will be restricted on Aghmashenebeli St from Marjanishvili Square to Queen Tamar Ave. Public transport from Queen Tamar Ave will continue operating along Tsinamdzghvrishvili and Kiev streets.

All traffic limitations will be lifted on May 27.