President Zurabishvili calls for unity, expresses support for Ukraine in her annual speech

Georgian President Salome Zurabishvili has spoken about the importance of unity and expressed support for Ukraine amid the movements of Russian troops in its border in her annual speech in the state legislature earlier today.

Zurabishvili commemorated the Georgian victims of April 9, 1989 and stated that they were ‘forerunners of victory and the country’s independence’ from Russia.

Unity cannot be achieved by force or by slavery. We’ve been on that path and will never return there. Therefore, diversity, diversified thinking, multi-partisanship are indivisible parts of this unity. This means that we also need to know concession and, if not taking someone’s opinion into account, at least to understand it and putting our country’s interests above our personal, party or other interests,” Zurabishvili said.

She expressed hope that the ruling Georgian Dream party and the opposition will come to an agreement amid the current political tension and praised the proposal offered by the EU-mediator to the parties.

Zurabishvili has mentioned the ‘current struggle of our Ukrainian friends’ and express her solidarity to them.

I believe it a sign of this solidarity today that we urgently return our ambassador to Kyiv,” Zurabishvili stated.

Zurabishvili has touched upon the ongoing controversy over the Namakhvani HPP and stated that both sides have strong arguments.

She has offered the creation of a state commission, composed of economists, energy experts, environmental activists, the local population, and foreign experts to discuss not only the fate of this particular hydroelectric power plant but also plans and prospects in energy.

Such discussion should be as public as possible. If necessary, the Presidential Palace can be used for this purpose,” Zurabishvili said.

Zurabishvili stated that the EU and NATO are the choice of the Georgian people and that the occupation of Georgian territories by Russia remains the most challenging issue for the country. 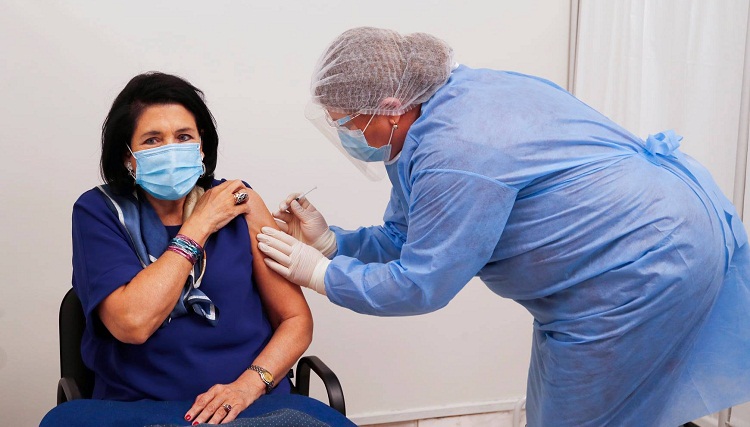 She stated that ‘it is utterly unacceptable’ when, ‘without any humanity or sympathy’, some Georgian doctors working abroad criticize the country’s moves and ‘planting distrust and hopelessness’.

It is also unacceptable when at home, famous individuals and media representatives spread false information about the consequences of vaccination, thus increasing distrust,” Zurabishvili said.

She stated that the pandemic can be defeated only through a united and a responsible approach.

I believe that the first step towards unity is the enforcement of current regulation evenly for everyone and everywhere – at football games, on Nowruz, in church services, at Pozner’s feast, at the long-delayed weddings and birthdays of our citizens, during protests or public gatherings,” Zurabishvili stated.

She stated that Georgia should be careful not to be provoked by Russia.

Zurabishvili stated that ‘If we had been careful, we would not have accepted the tensions caused by (Russian journalist) Pozner's visit, nor would we have allowed (Russian MP) Sergey Gavrilov into the seat of the chair of Georgian Parliament.