Two individuals were injured in a confrontation between Muslim and Christian communities in Georgia’s western village of Buknari, in Chokhatauri municipality.

For several months now, part of the local Muslim population has wanted to build a mosque in the village, though they are opposed by the Christian local population, which resulted in a conflict between locals on January 12.

Yesterday late after the incident police detained one individual for attacking two locals in the village of Buknari.

The Georgian Ministry of Internal Affairs said that two minors with head injuries were transferred to hospital and their lives are not in danger.

While responding to the issue, the Human Rights Education and Monitoring Centre (EMC) said that the Muslim community has been asking for the construction of a mosque in the village since 2007, however they encountered obstacles and space for the mosque has not been allocated until now.

Ten months ago, the local Muslim community bought a house in the village and soon began to attend religious services there. The Muslim community said they were not going to build a mosque, as they did not want to irritate the neighbouring Christians. However, the Christian locals were still irritated as Muslims organised a prayer space in the village, which resulted in the confrontation yesterday”, reads an official statement of EMC.

EMC also said that some Christian locals do not allow the Muslim community to pray, as ‘they are settlers in the village and have no right to build a mosque there’. 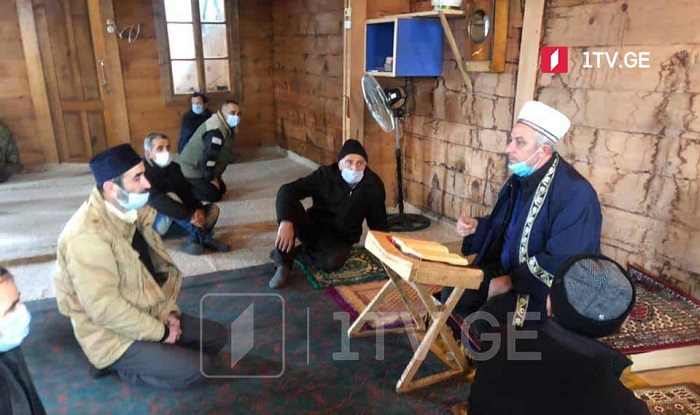 The Muslim Mufti of Kobuleti and Chokhatauri, Aslan Beridze,  has visited the village of Buknari today. He said the prayers will not stop in the village. Photo: 1TV.ge.

The Mayor of Chokhatauri, Irakli Kuchava, stated earlier today that the government and police will do their best to resolve the conflict without any excesses.

We are one people, one race. We need to find a common language… The government and police will do their best to resolve this conflict without any excesses”, said Kuchava.

A dialogue between the conflict parties was supposed to take place in the region today, but the meeting was not held.

The Muslim Mufti of Kobuleti and Guria, Aslan Beridze,  visited the village of Buknari today. He said the prayers will not stop in the village.