On January 15, traditional prayers of Muslim and Christian community will be held at the same time in the village of Buknari.

After prayer services, both sides of the conflict will meet each other with Guria MP Vasil Chigogidze, Mufti of Georgia Adam Shantidze, and one representative from the Orthodox Church.

The purpose of the meeting is to resolve the conflict that started over a Muslim mosque in the village of Buknari.

For several months now, part of the Muslim population has wanted to build a mosque in the village, though the local Christian population has resisted the move, resulting in yesterday’s confrontation when two individuals.

Today, the Muslim comminity held a rally at the municipality building of Chokatauri.

Their main demand was to plan a meeting between the parties of the conflict, which would be attended by the Mufti of Georgia, the MP of Guria, and a representative from the Orthodox Church. 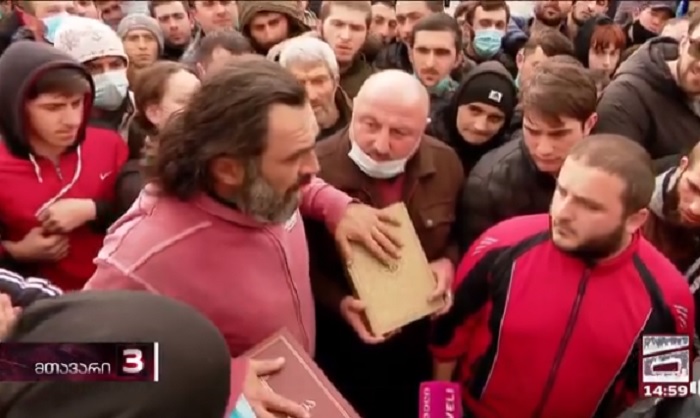 A local from the Muslim community brought a Quran and a Bible to the rally and called on the conflict sides to reconcile. He said that ‘confrontation between religions is a shame’. Photo: Mtavari TV Channel.

While responding to the issue, the Human Rights Education and Monitoring Centre (EMC) said that the Muslim community has been asking for the construction of a mosque in the village since 2007, however they encountered obstacles and space for the mosque has not been allocated until now.

Ten months ago, the local Muslim community bought a house in the village and soon began to attend religious services there. The Muslim community said they were not going to build a mosque, as they did not want to irritate the neighbouring Christians. However, the Christian locals were still irritated as Muslims organised a prayer space in the village, which resulted in the confrontation yesterday”, reads the official statement of EMC.

Responding to the issue, Georgian President Salome Zurabishvili said that Georgian citizens are guaranteed freedom of religion by the Constitution and it must not be restricted.

The conflict is one of a few cases, but it must be said that no one has the right to overshadow our historical achievements, to question the peaceful coexistence of religions in Georgia, the unity of different faiths and tolerance”, said Zurabishvili.