The religious controversy between the Muslim and Christian communities of the village of Buknari has been resolved peacefully earlier today, as the conflicting sides have agreed that the Muslim community will continue their prayers in the house which they have bought a year ago for religious services.

The meeting was attended by the Mufti of Georgia, the MP of Guria, and a representative from the Orthodox Church.

Of course, we [the conflicting sides] reconciled… I believe that we will continue to live peacefully. We don’t want to talk about misunderstanding anymore”, said a representative of the local Muslim community, Nugzar Chaghalidze.

Wisdom and the love we [Muslim and Christian locals] had for each other won and I hope for this love”, said a local from the Christian community, Mariam Kheladze. 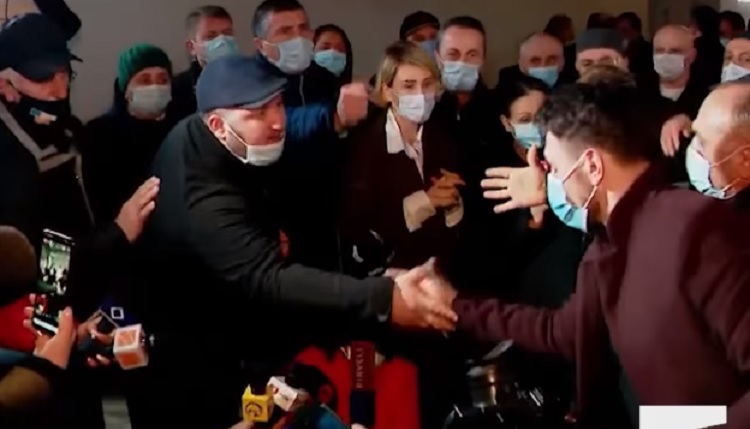 Before the meeting, traditional prayers were held by both the Muslim and Christian communities at the same time in the village of Buknari. Photo: Mtavari TV Channel.

For several months now, the Muslim population in Buknari has wanted to build a mosque, though the local Christian population has resisted the move.

Several days ago the locals heard from some individuals that the Muslim community was going to build a mosque in the village, which resulted a confrontation on January 13, when two individuals were injured.

Katamadze said that before the parliamentary elections the representatives of the Ruling Georgian Dream party promised the local Muslim community that they could build a mosque in the village, which caused the current tensions in the village.

Some of the locals said Katamadze was a ‘provocateur’ and demanded him to leave the place.

Later after the incident police officers made Katamadze leave the area in order to relieve the tension.