Prime Minister Giorgi Gakharia has responded to the religious conflict in Georgia’s western village of Buknari and said that the Georgian government will not allow anyone to provoke confrontation between citizens on religious grounds.

Religious diversity is a historical fact [in this country] and it is our richness. This is how we have been building our state for centuries and everyone should understand that the government of Georgia was and will be a guarantor of the constitutional rights of every citizen. We (the government) will not allow anyone to provoke a confrontation between our citizens on religious grounds through illegal actions”, said Gakharia earlier today.

For several months now,  the Muslim population in Buknari has wanted to build a mosque, though the local Christian population has resisted the move, resulting in a confrontation on January 13  when two individuals were injured.

On January 14 the Muslim community held a demonstration at the municipality building of Chokatauri.

Their main demand was to plan a meeting between the parties of the conflict, which would be attended by the Mufti of Georgia, the MP of Guria, and a representative from the Orthodox Church.

Today the conflicting sides  have met with each other and the result of the meeting will be known bt the end of the day. 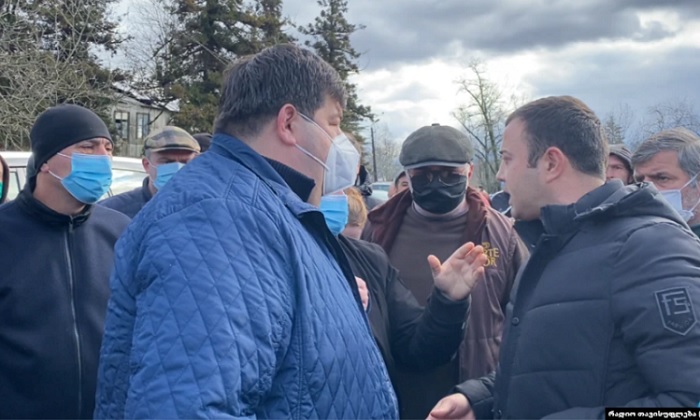 Locals said Katamadze was a ‘provocateur’ and demanded him to leave the place. Photo: RL/RFE.

Katamadze said that before the parliamentary elections the representatives of the Ruling Georgian Dream party promised the local Muslim community that they could build a mosque in the village, which caused the current tensions in the village.

Some of the locals said Katamadze was a ‘provocateur’ and demanded him to leave the place.

Later after the incident police officers made Katamadze leave the area in order to relieve the tension.