The Georgian Chief Prosecutor’s Office has asked parliament to suspend MP status for the new chair of the United National Movement (UNM) opposition party Nika Melia to then request his arrest from the court.

Melia is charged with incitement to violence during the June protests in Tbilisi back in 2019 and was released on 30,000 GEL bail.

However, he violated the conditions of bail by publicly removing his surveillance bracelet and 40,000 GEL was added to his bail in November 2020.

Melia has refused to pay the 40,000 GEL bail (in 50 days) and on February 5, 2021 the Georgian Chief Prosecutor’s Office warned him of changing the bail into detention.

This is the second time the Chief Prosecutor’s Office requested Melia dismissal from parliament.

In December 2019, the previous ninth convocation of Georgian parliament suspended the MP status of Melia following the court’s verdict in the high-profile Cartu Bank case. 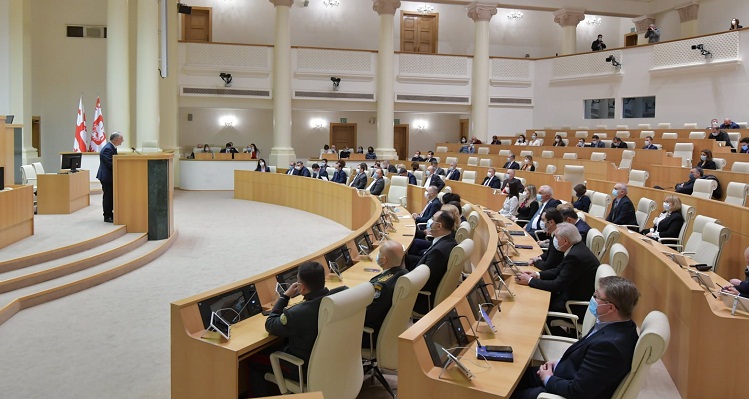 The Georgian Dream ruling party has 90 MPs in the 150-member parliament, while only six of 60 opposition MPs have entered the state legislature so far amid the opposition's protest. Photo: parliament of Georgia press office.

Melia, along with other opposition MPs, is demanding repeat parliamentary elections and has refused to take up his mandate in the 10th convocation of Georgian parliament in protest.

Georgian Prime Minister Giorgi Gakharia has stated that ‘Melia is trying to get points with political hooliganism.’

For me Melia’s refusal to pay bail is a cheap, aggressive rethorics and an attempt to get more political points through this political hooliganism. It is not serious,” Gakharia said.

Melia says that the Georgian Dream government is using all levers to hamper his political activities.

I am not trying to provoke the government, I am trying to break the chain of illegality, political prosecution, manipulation (by the government) which affects the Georgian state and pushing the country back into the Russian orbit,” Melia said.

He said that charging him with violence in the case of June 19 protests was ‘absurd and illegitimate.’