After the meeting Aliyev said that Azerbaijani-Georgian close cooperation is beneficial not only for the countries, but also the whole region.

Aliyev also said that Azerbaijan ‘is happy with the success of the Georgian government in all fields.’

Our cooperation for regional foreign policy is close. New challenges, as well as new opportunities have emerged. Our cooperation is beneficial for the whole region,” Aliyev said.

He stated that economic cooperation between Georgia and Azerbaijan has become more intense and trade turnover has increased over years.

Aliyev has praised Georgia’s ‘positive investment environment and economic reforms which have resolved a number of social and economic problems.’

He stated that traditional directions of cooperation between Azerbaijan and Georgia, related to gas and oil transportation, have been discussed at the meeting, as well as various joint projects.

A special form of cooperation has been established between Georgia and Azerbaijan because the projects (we are implementing together) are crucial for the whole Eurasia region as well as for other foreign states,” Aliyev said.

Garibashvili stated that Georgia is interested in further strengthening of political, economic, cultural and other ties with Azerbaijan. 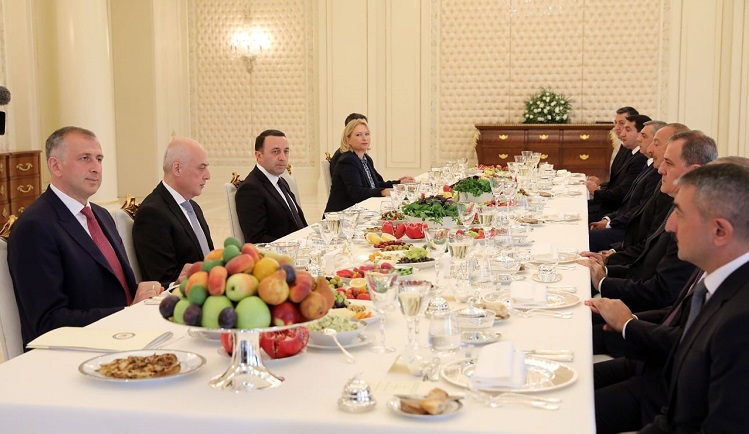 Aliyev has hosted the Georgian delegation at a working dinner.Photo: government of Georgia press office.

We are also interested in regional peace and stability which is essential for economic development,” Garibashvili said.

He stated that his visit is a ‘good opportunity’ to further upgrade bilateral cooperation between ‘brotherly nations.’

During the visit the eighth meeting of the intergovernmental economic commission was held, which was chaired by Garibashvili and Aliyev, to further strengthen economic ties and make new decisions.