Heavy rainfall has hit Black Sea coastal cities in Georgia today, including in Batumi and Ureki where flooding took place.

Dozens of streets, homes and shopping facilities have been flooded in Batumi while in Ureki along with houses the police station was flooded to the point that law enforcers were unable to enter the building.

About 40 calls have been recorded regarding the flood in Batumi today, local media outlet Batumelebi.ge reports.

Batumi water supply and sewerage network service company Batumis Tskali states that pumping work is underway in the most problematic parts of the city. 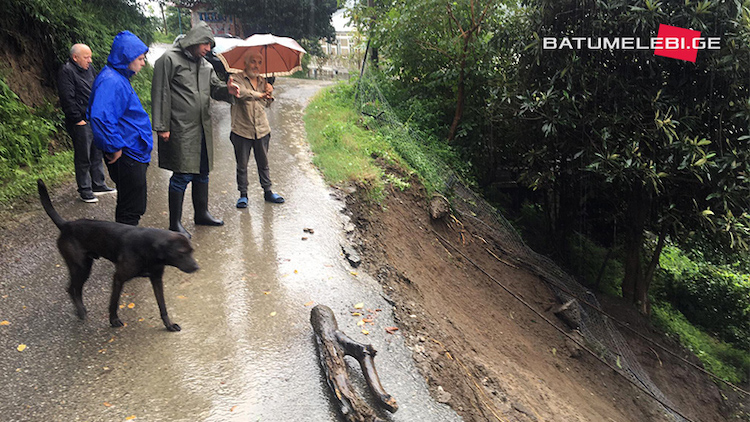 The landslide in the village of Peria near Batumi damaged three houses. A 33-year-old woman was injured and taken to the hospital. Photo: Batumelebi.ge.

Dozens of old and new landslide hotspots have been activated in the Khelvachauri municipality of the western Adjara region, Radio Liberty Georgian service reports.

Khelvachauri municipality mayor Jumber Vardmanidze told the media outlet that seven families have become eco-migrants, noting that their houses are no longer suitable for living.

As a result of the landslide, central roads in several Adjaran villages are blocked.

The landslides have also occurred in about 20 places of Batumi’s suburbs.

Weather forecasts say heavy rain is expected for the next two days in Batumi.