The ruling Georgian Dream party has signed a EU-proposed agreement by mediator Christian Danielsson earlier today which concerns ‘ambitious electoral and judicial reform’ and offers amnesty for suspects and convicts of the June 2019 protests in Tbilisi, including the currently imprisoned head of the United National Movement opposition party Nika Melia.

The Georgian Dream party and the opposition failed to sign the same agreement at the end of March 2021, following the second arrival of Danielsson to help the parties come to an agreement.

The opposition parties, which have been demanding repeat parliamentary elections since November 2020, stated that the conduct of repeat elections were their top demand, while the proposal by Danielsson does not include a note about the issue.

The ruling Georgian Dream party stated then that they were ready to sign the agreement with ‘slight changes.’

Now it’s time for the opposition to sign the agreement. The opposition has one more chance to confirm that they put state interests above their own political interests,” Talakvadze said.

He stated that the EU proposal does not include the conduct of repeat parliamentary elections ‘because our partners have no questions about the legitimacy of the elections.’

However, Talakvadze said that if the ruling party will not receive at least 40 per cent of votes in this year’s municipal elections, the party will discuss the issue of conduct of repeat parliamentary elections.

It also stated that the parliament ‘shall adopt ambitious judicial reform in this parliamentary term.’ 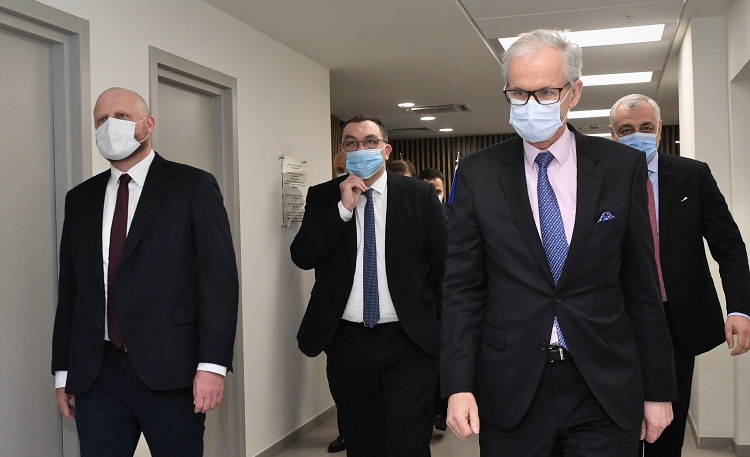 Danielsson with Georgian opposition leaders during his second arrival in Georgia in March. Photo: EU in Georgia press office.

The document said that opposition MPs shall be assigned five committee chairmanships in parliament.

The document cited OSCE/ODIHR as saying that the October 31 parliamentary elections in Georgia ‘were competitive and, overall, fundamental freedoms were respected’.

The parties acknowledge their differing assessment of the 2020 elections and agree to take up their parliamentary mandates and participate in future elections on the basis of the electoral reform agreed here above, in the interest of Georgia’s political stability and in order to implement this agreement,” said the text.

Danielsson, who was earlier sent to Georgia for mediation by the European Council President Charles Michel on March 12, returned back to Tbilisi on March 27 after the failure of his previous mediation efforts.

However, his second arrival ended without result as well.

Danilesson expressed hope before his departure that the parties would sign the agreement to solve the current political tension in the country.