The Georgian Government issued the decree to prevent the spread of the new, China-born coronavirus Covid-19 on January 28, according to which the state agencies are obliged to finance anti-virus measures from their own budget.

The Georgian Government decided to suspend direct flights to Iran a week ago amid the new coronavirus outbreak. Earlier today it was announced the government will actively work with neighbouring countries to bring Georgian citizens from Iran back home. The press office of the Prime Minister said that Georgian citizens coming back to Iran are at Armenian and Azerbaijani borders for now.

The Ministry of Internal Affairs (MIA) has released an official statement earlier today, which reads that special tents have been installed in accordance with modern standards at the checkpoints of the land borders and in all airports of Georgia, where passengers from high-risk countries will be accommodated before being transferred to special facilities. 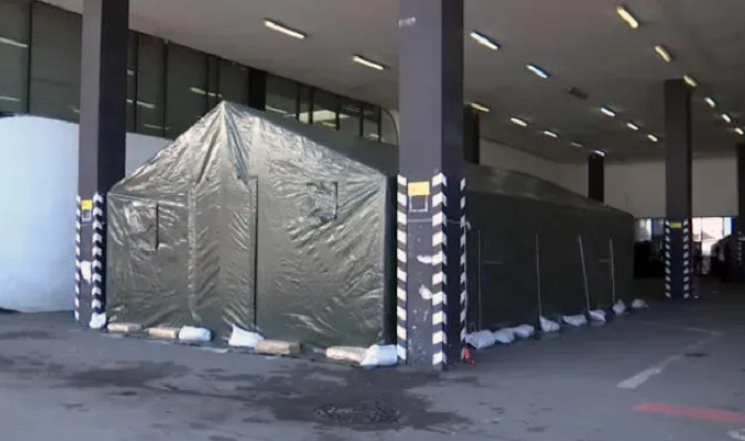 Passengers coming back from high-risk zone countries will be accommodated in semi-thermal tents instead of waiting rooms. Photo: IPN.

Passengers coming back from high-risk zone countries will be accommodated in semi-thermal tents instead of waiting rooms. Medical staff will be constantly on duty in order to avoid the risk of spreading the new coronavirus”, reports the press office of the MIA.

As of now 19 individuals remain in Tbilisi Hospital of Infectious Disease, with three cases of coronavirus detection.

The samples of another eight individuals at the hospital have been sent to Tbilisi Lugar Lab and the results will become known before the end of the day.

Two-week spring holidays starting today have been announced throughout the country.

Special devices have been installed in Tbilisi airports which thermoscreen all passengers.

More than 97,000 cases of the new coronavirus have been confirmed around the world, with most cases in China, South Korea, Iran and Italy.

2,900 have died from the respiratory infection, while over 43,000 have recovered.