Deoccupation ‘through peaceful means and with support of the international community’, restoration of territorial integrity and dignified return of refugees and internally displaced persons are among Georgia’s key foreign policy goals based on the resolution adopted by the Georgian parliament.

Georgia will continue its pragmatic and principled policy with the Russian Federation, based on state interests and fundamental norms of international law" the resolution reads.

It further notes that 'the aim of this policy' is to end the Russian occupation, fully restore the sovereignty and territorial integrity of Georgia and to strengthen peace, security and stability in the region.

Georgia’s integration to the European Union and NATO are also among the ‘irreversible’ priorities.

The Georgian government ‘intends to keep the timely and effective fulfilment of the EU-Georgia Association Agreement commitments and the consistent legislative and institutional approximation with the EU to apply for full-fledged EU membership in 2024’. 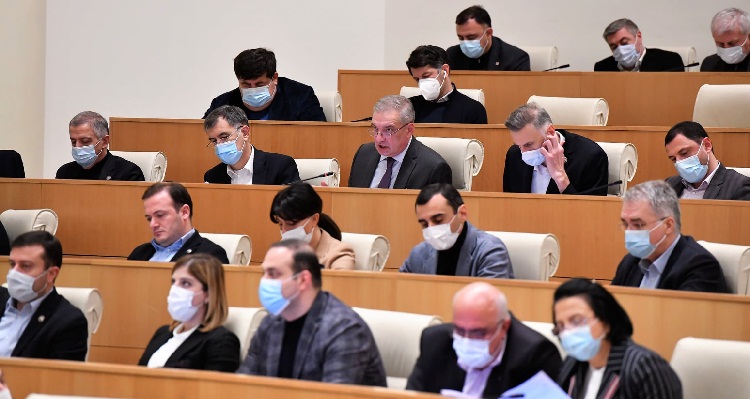 The ruling party MPs adopted the resolution on December 25. Photo: Parliament of Georgia/Facebook

Georgia will also continue its ‘political dialogue’ with the NATO member states and use the practical tools and mechanisms as well as strengthen its defence capabilities and compatibility with NATO to ensure ‘strategic readiness’ for the eventual membership.

The goal of the Georgian government is also to deepen relations with the United States as the country's ‘main strategic partner and ally’.

A special priority is to strengthen US-Georgian cooperation to increase US involvement in the Black Sea geostrategic area, strengthen defence and security cooperation, education and interpersonal relations, reach a free trade agreement with the US, and, thus, increase the US investment in Georgia”, the resolution says.