PACE calls on Georgian opposition to take up mandates in parliament

The co-rapporteurs of the Parliamentary Assembly of the Council of Europe (PACE) for the monitoring of Georgia, Titus Corlatean and and Claude Kern have called on eight Georgian opposition parties to accept the parliamentary seats they won in the October 31 parliamentary elections.

These elections have resulted in a diverse parliament where the ruling majority will face a strong opposition that can ensure proper parliamentary oversight. The only appropriate forum for this, as well as for debating and challenging diverging political views, is the parliament. For the sake of Georgia’s democratic consolidation, we therefore call on all parties to accept the mandates they won in these elections and enter into the new parliament,” said the co-rapporteurs.

Corlateanand and Kern stated that ‘we fully support the findings and overall assessment of these elections’ by the international election observation mission, of which PACE was a part.

At the same time we also note the significant number of irregularities reported, including persistent allegations of electoral misconduct such as abuse of administrative resources and pressure on voters and party activists. These allegations are of serious concern and need to be satisfactorily and transparently investigated by the responsible authorities,” they said. 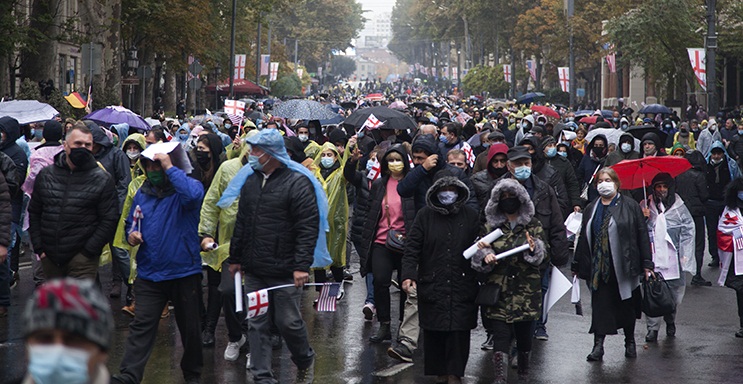 Opposition parties say that the elections were fabricated and are demanding repeat elections. Photo: Nino Alavidze/Agenda.ge.

The co-rapporteurs stated there can be ‘no perception of impunity’ for electoral misconduct in Georgia and that the shortcomings noted by the observers ‘need to be fully addressed’.

The new parliament has an important role to play in this,” said the statement.

Georgian opposition parties took to the street following the October 31 elections and refused to participate in the November 21 run-offs in 17 election constituencies.

They say that the elections were fabricated and are demanding repeat elections.

The ruling Georgian Dream party took 90 seats in the 150-member parliament, while the remaining 60 seats went to opposition MPs.

The ruling party will be able to form a government alone, as the minimum to do so is 76 votes.

Unlike the 2016 parliamentary elections, in which the ruling party MPs took 116 seats, in the 10th parliament the party does not have a constitutional majority - 116 MPs - and will not be able to make changes in the country’s constitution without the support of opposition parties.