The delegation of the European Union to Georgia regrets ‘the mistrust that has affected the electoral process' and the fact that opposition candidates 'did not contest seats in the second round’ of parliamentary elections.

Noting that the European Union ‘strongly supports democratic processes and the respect for legal frameworks’ the EU delegation said ‘Georgia needs a functioning parliament as the central forum for political debate, with all parties working together to advance reforms, in line with our mutual commitments under the Association Agreement’.

We therefore hope and expect that all political parties can overcome their differences to enable elected Members of Parliament, notwithstanding their differing assessments of the electoral process, to take up their seats”, the EU delegation has stated.

The Delegation of the European Union to Georgia, in coordination with EU Heads of mission, issues the following comments on the 2020 parliamentary elections, on 22 November 2020https://t.co/1eAcbTl3AI

The delegation further encourages members ‘to use the mandates entrusted to them by the citizens of Georgia to address outstanding political issues, including by improving the foundations for future elections through ambitious and credible electoral and judicial reforms’.

The Parliament also needs to play its full role in addressing the urgent health and socio-economic challenges the country is facing due to the pandemic”, the EU statement reads.

Urging all sides ‘to refrain from provocative actions’ and ‘to uphold the rule of law’, the delegation says they ‘fully stand behind every citizen’s right to peacefully exercise their freedom of speech and assembly and condemn all acts or threats of violence’.

A high responsibility now rests on the political leaders of both majority and opposition parties to come together to find common ground and build common purpose, to enable Georgia to advance effectively on its democratic path and the implementation of our agreed European agenda, in the interest of Georgia, its citizens and of EU-Georgia relations”, the EU delegation has stated. 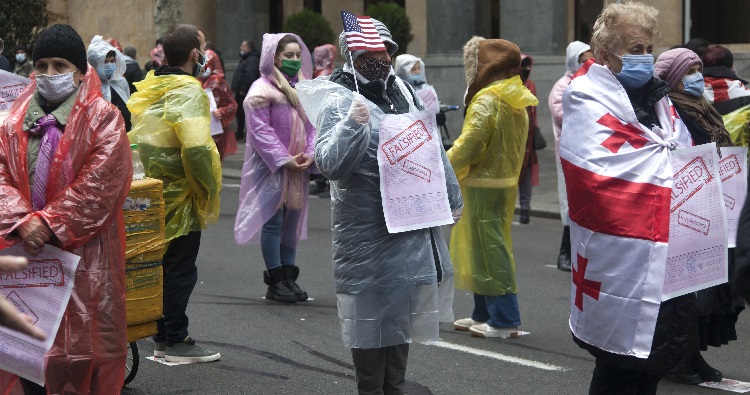 During the November 21 run-offs, the ruling Georgian Dream party has won all of the 17 majoritarian constituencies and the mayoral by-elections in Kutaisi.

The candidates of five opposition political parties who had qualified for the run-offs had unanimously declared their unwillingness to participate.

Claiming that the October 31 parliamentary elections were falsified they demand new elections be held under the new CEC leadership.

Despite their boycott, opposition continues to hold negotiations with the ruling party under the foreign ambassadors' mediation aimed to reach a consensus over the current political crisis.