The Georgian Chief Prosecutor’s Office has requested help from the US to investigate a high-profile murder case of the Toradze family back in 1992, involving the current co-founder of the opposition-minded TV channel Mtavari Arkhi Giorgi Rurua.

Georgia says that it needs the US support to interrogate Tamar Toradze, the only survivor of the Toradze family, who is a US citizen and accuses Rurua of killing seven of her family members (five killed, two still missing).

Rurua, who is the brother of deceased United National Movement official Nikoloz Rurua, was detained last year for the illegal possession of firearms, a charge Rurua dismisses.

The united opposition, which made an agreement with the ruling Georgian Dream party on March 8, 2019 on how to hold upcoming elections in autumn, demands the release of ‘political prisoner’ Rurua, stating that if the man remains in prison, they will not vote for the constitutional changes. 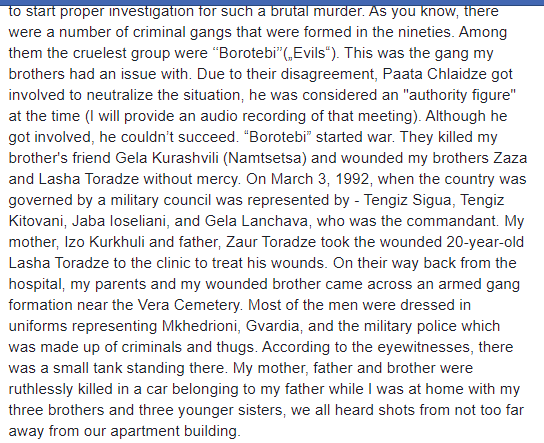 Tamar Toradze demanded the investigation into the Toradze murder case in May 2020, sending an open letter to US senators who called Rurua ‘a political prisoner.’

In the letter Toradze tells the senators that ‘Giorgi Rurua is not a media owner or a political prisoner, he is a cold blooded murderer,’ publishing the details of the case and reasons why Rurua has remained unpunished for years.