The ruling Georgian Dream party has accused the opposition of organising a rally in the Marneuli municipality of eastern Georgia earlier today, which has been on lockdown due to the coronavirus since March 23.

Residents of several villages of the municipality blocked the road connecting Marneuli and  the village of Shulaveri earlier today, demanding the lifting of restrictions on selling agricultural products.

Marneuli and Bolnisi municipalities are two of the main producers of agricultural products in Georgia.

The opposition has dismissed the allegations, stating that they do not know who stood behind the rally.

It is a crime and they (the opposition) are playing with fire,” ruling party MP Irakli Kobakhidze said.

A member of the European Georgia opposition party Akhmed Imamkuliev and a member of the United National Movement opposition Azer Suleimanov were present at the rally, where people were shouting ‘Misha, Misha!’ (ex-President of Georgia Mikheil Saakashvili). 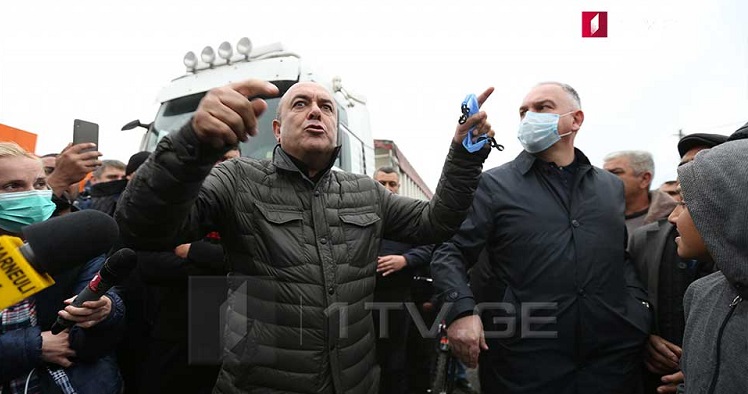 They said that the Georgian Dream government has taken no genuine steps to help the people who are dependent on the sale of agricultural products.

Kvemo Kartli governor Shota Rekhviashvili came to the rally, having had a verbal dispute with Imamkuliev.

Rekhviashvili said that one of the largest distribution companies takes agricultural products out from the municipalities for sale in Tbilisi.

He stated that since many people are no longer in Tbilisi and temporarily moved to the regions due to the coronavirus, there is no high demand in the capital for the products.

He said that negotiations are in progress for the agricultural products from the municipalities to be distributed in the regions.

Rekhvishvili said that the distribution system is not perfect due to the current situation in the country, but said that the government has done its utmost and will do its best to distribute more products from the municipalities.