Recently elected President Salome Zurabishvili has held her first meeting with the media, during which she spoke about her foreign policy priorities and answered journalists’ questions on the most controversial domestic or international issues.

In her address before the press conference Zurabishvili said that she will not receive a salary as the president and will use the money for charity and other goals, as she has a pension from France [where she lived and worked for years] which is “absolutely sufficient for me.”

She said that her first foreign destination as the president will be Brussels.

I will hold my first meetings abroad at the headquarters of the EU and the NATO,” Zurabishvili said. 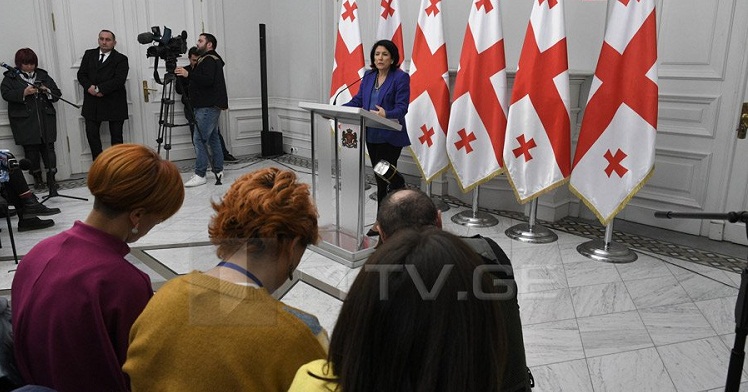 The President did not comment regarding the possible disagreement in the Georgian Dream ruling team, said that it is not her competence. Photo: 1TV.

Responding to a question on Russia-Georgia relations, Zurabishvili says that “according to the current situation Georgia should not make serious decisions regarding Russia without consulting with its foreign allies.”

Answering a question regarding the recent developments in the Ukrainian church and its independence from the Russian church, Zurabishvili said that making first statements regarding the issue is the competence of the Georgian patriarchate.

If the Georgian church is cautious because of certain consequences it will not be right of me to take the responsibility and openly express my view,” Zurabishvili said.

Zurabishvili refused to comment on the controversial list of judges for the Supreme Court of Georgia and said that “the issue is beyond my competence”, but added that she will “stand where the Georgian people will stand.”

Zurabiahsvili also said that she “saw no grounds,” to withdraw the candidate of former Georgian President Giorgi Margvelashvili in the High Council of Justice Anna Dolidze, as several judge members of the council, which backed the list of judges, are against her for her critical statements to the current court system.