Georgian Minister of Regional Development and Infrastructure Maia Tskitishvili says international financial institutions have eight demands that should be fulfilled in order to invest in the project.

The first point is about development phases of the project. Per the current agreement the first phase of the project must ბe completed in three years after the start of construction. The first phase is due to be completed by November 20, 2020. Regrettably, as there are no finances for this project, I presume this deadline will not be met”, Tskitishvili said.

The Minister spoke about the Anaklia Deep Sea Port project of Georgia at the plenary session in the Parliament. Photo: Ministry of Infrastructure.

Once there is a feasibility study, all investors will come to a consensus whether the port should be developed or not and then move to the next phase”, Tskitishvili said.

Tskitishvili said that the next demand is about the so-called golden share.

The state has only one share in the consortium which develops the project. Per the existing agreement, the state has the right to require consensus on a number of essential issues with this golden share. The banks' proposal is to reduce significantly the state impact mechanism as well as the golden share”, said Tskitishvili.

Tskitishvili said that the other points are related to the continuation of the terms, compensation or political force majeure.

In any case the changes are harmful to the state interests in comparison with the existing agreement”, said Tskitishvili.

One of the demands is related to the road and railway that will be connected to the port.

Here the banks require that works, resettlement and all the process to be developed following the investors’ rules, which was not initially envisaged. We have to build a road and railway with the state funding that will remove the commitment to donor procedures”, said Tskitishvili. 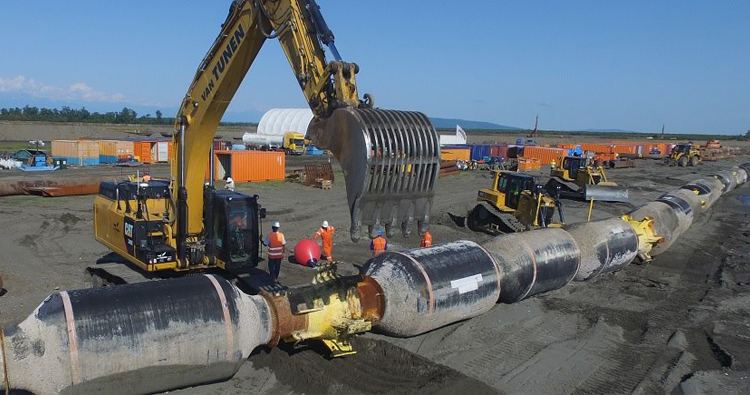 A cutter suction dredger ship, the Athena, arrived in Anaklia on September 17, 2018 to dredge the port bed and bring up some five million cubic meters of mud out of the sea. Photo: Anaklia Port.

One of the main problems that the banks name is the termination of the contract and compensation regime in case of investor defaults.

At the stage we have a deal that if the contract is terminated due to the government’s or the investor’s failure, the port will be returned to the state ownership and a process of searching of the new investor will be started. The liabilities that the previous investor had with the banks will be spread to the new investor as well. Now the banks demand the state to guarantee the loans”, said Tskitishvili.

Tskitishvili said that the negotiations will be continued with the investors to make the final deal.