Candidate for premiership answers questions on a rally dispersal, vows the end of UNM

The candidate for the premiership Giorgi Gakharia has been asked almost all the questions regarding the June 20 rally dispersal by the United National Movement MPs earlier today, as part of the mandatory procedure of a meeting  with parliamentary factions before the final vote for the new cabinet and the PM takes place.

The UNM MPs re-accused Gakharia of the brutal dispersal of the rally and the usage of a “less lethal rubber bullets.”

Gakharia said that the accusations were lies and presented the bullet with the inscription reading “non-lethal.”

He said that police used up to 800 rubber bullets during the dispersal, “only the amount the police were forced to avoid the storm on parliament.”

He dismissed accusations that people “were targeted before being shot,” saying that the bullet is effective only in the 15-20 meter distance. 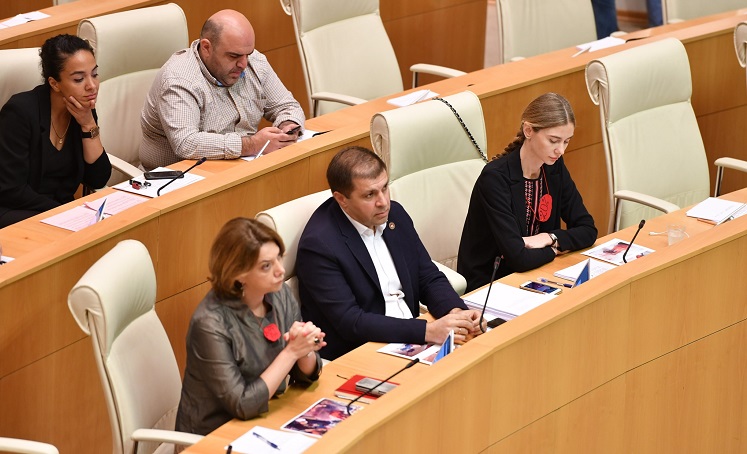 Gakharia told the opposition MPs that he knew that Russian MP Sergey Gavrilov would be the participant of the international religious forum in the Georgian parliament on June 20, adding that there was no evidence regarding Gavrilov's participation in the war against Georgia not to allow him to the country. Photo: President's press office.

The instruction prohibits shooting from a very close distance. Police are instructed to shoot the bullets from the 20-meter distance. There were cases when the rule was violated and the investigation to reveal the law enforcers violating  the rule is in progress,” he said.

Gakharia stated that the law enforcers did not shoot to journalists deliberately and those who received injuries became random victims.

Gakharia accused the UNM of sparkling tension at parliament on June 20 and continued provocations.

You have cheated people for nine years while in office and continue to do so in the opposition. I will end you [your being in politics, in parliament] and the Georgian people will end you in the elections [in 2020],” Gakharia said.

Gakharia said that he would make “slight changes” in his decisions on June 20 and said that he will order the use of bullets every time when it is required for the state interests and security.