Shots of human bodies in motion and a printing technique placing people on gravestone images will bring the work of photographers David Meskhi and Nata Sopromadze to viewers in an exhibition hosted by Tbilisi-based Project ArtBeat starting today.

In the dual display, the downtown Project ArtBeat Gallery will highlight the two creatives with their shows Keep Falling and Death Shop, titled after the subject themes of the featured photographs.

In the former, a focus of Meskhi’s artistic practice on dynamics and suspension of bodies will be explored through exhibits informed by his lifelong impressions.

The brief feeling of weightlessness when the body reaches the highest point, pausing momentarily before reversing direction and gravity pulls it back towards the ground, except the last step never happens in my photography,” the artist explained in preview of his series.

Devoid of documentary signifiers, the photographs feature “a mystical, intangible quality” and are combined with images from the artist’s time in the military and those depicting celestial bodies, another of his focus subjects.

The Berlin-based photographer has been showcased in displays including this year’s exhibition at Berlin’s Galerie für Moderne Fotografie and the Museum Angewandte Kunst in Frankfurt in 2018.

Meskhi has also worked on the subject of human body in motion through documentary filmmaking,  co-directing the award-winning Georgian-German production When the Earth Seems to Be Light with Salome Machaidze and Tamuna Karumidze.

In the other part of the Tbilisi display, Nata Sopromadze will introduce viewers to her Immortals series of photographs that emerged from a connection the creative drew from her works over the years. 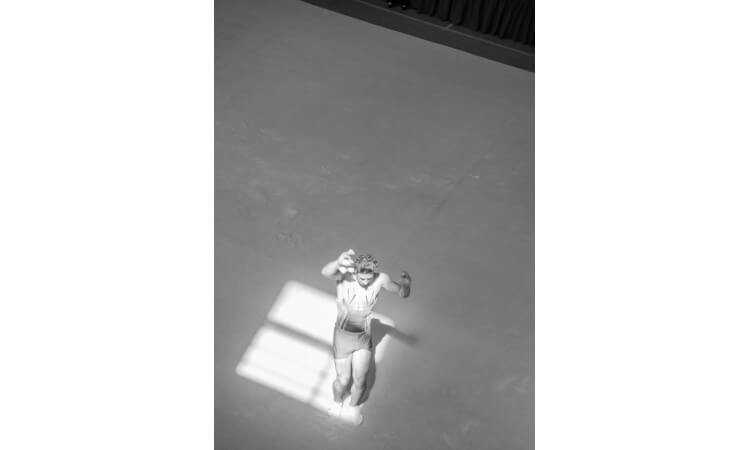 I discovered that the same images [kept] appearing: flowers on the graves, grey hair, pools of blood during mountain celebrations, fading plants, cemeteries, lifeless animals left on the roads [...]

Each photo speaks about death, without a human. That’s how I started exploring death with the help of photography,” Sopromadze said about the series.

The technique the artist opted for is as noteworthy as the subject for the selected images, with the photographer asking her collaborators to pose in designer clothes and have their images printed on black granite — a customary option for making gravestone portraits in Georgia.

The reality depicted in the shots, despite its tragic nature, often creates beauty for me and this indefinable mysticism attracts me most of all in this unusual collection,” Sopromadze noted.

The creative has featured in displays including Broken Sea and Elementary Particles (Tbilisi, 2018) and is a co-founder of the ERROR IMAGES Georgian photo agency.

Keep Falling and Death Shop will be on display at Project ArtBeat Gallery, located at 14, Pavle Ingorokva Street, between August 29-October 13.