Members of the Russians social-liberal opposition party Yabloko, who are in Georgia to participate in the Georgian Development Platform, say that they respect Georgia’s territorial integrity and justify the ongoing  protest of the Georgian people triggered by the recent conduct of a Russian MP in the Georgian parliament.

Decisions made by the Russian government in 2008 unilaterally [to start the war with Georgia], of course, did not benefit friendly and  neighbourly relations and ending of conflicts in Abkhazia and Tskhinvali [two breakawy regions of Georgia]. Taking this into account, I understand the feelings of the Georgian people who were angry when they saw Russian MP Sergey Gavrilov in the seat of the Georgian parliamentary speaker. It was an incorrect step. During such a visit it is important to take the political background into account,” Deputy head of the party Alexander Grezdilov told IPN.

Russian opposition politicians were invited almost a year ago to participate in the Georgian Development Platform, a programme which aims to share the Georgian experience in different fields, head of the Europe-Georgia Institute Giorgi Melashvili told Agenda.ge.

The event, which is also attended by delegates from Ukraine, Belarus, Armenia and Azerbaijan, is organised by the Europe-Georgia Institute and Friedrich Naumann Foundation for Freedom South Caucasus. 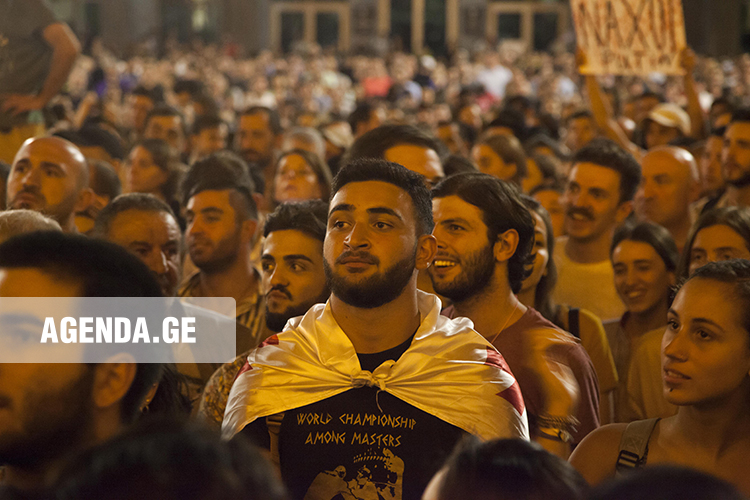 Yabloko members say that Gavrilov should not have taken the seat of the Georgian parliamentary speaker, which then spakred the protests. Photo: Nino Alavidze/Agenda.ge.

Considering the current developments,  we decided to add topics to the event, to raise the awareness regarding Tbilisi protests, “Melashvili told Agenda.ge.

Grezdilov said that it was important for them to see the situation at the scene and receive unbiased information.

Today, when Russian state and the government-affiliated media agencies are speculating much about Tbilisi rallies and the ongoing developments, we have decided to come and see the situation by own. Responsible politicians are building bridges, not burning them in difficult times,” Grezdilov said.

The occasion is due to take place between July 1 and 5.

Yabloko, who now has several MPs in parliament, is strongly opposing the policy of Russian President Vladimir Putin.

Russia imposed a temporary ban on flights to Georgia and strengthened control on Georgian products after several Russian MPs were forced to leave the Georgian parliament and the country on June 20.

Georgians were irritated by the address of Russian MP Sergey Gavrilov from the seat of the Georgian parliamentary speaker during the Interparliamentary Assembly on Orthodoxy on June 20.

Rallies are still underway in Tbilisi.