Updated: Presidential candidate and up to 10 people detained over Tbilisi cannabis legalization festival

Zurab Japaridze, the founder of the opposition party Girchi and the presidential candidate for the elections which are scheduled in one week, has been arrested at the cannabis legalization festival at Dedaena Park today.

Just before the arrest the presidential candidate was seen giving out three cannabis cigarettes.

The Georgian media has reported that while holding the ‘joints’ he told the people attending the event that he was waiting for a police reaction as his action was illegal.

The police, mobilised at Dedaena Park because of the festival, arrested him several minutes later. Other people have also been detained as a result of the confrontation that followed over the fact that Zura Japaridze was taken by the police.

The Interior Ministry said that the police officers did not use force as they offered to Japaridze to follow them voluntarily and the presidential candidate did so.

The investigation against the cannabis legalization festival organised by Girchi has started a few days ago as it is perceived as illegal under Georgian legislation. The MIA says Japaridze was taken to the police office as part of the investigation. 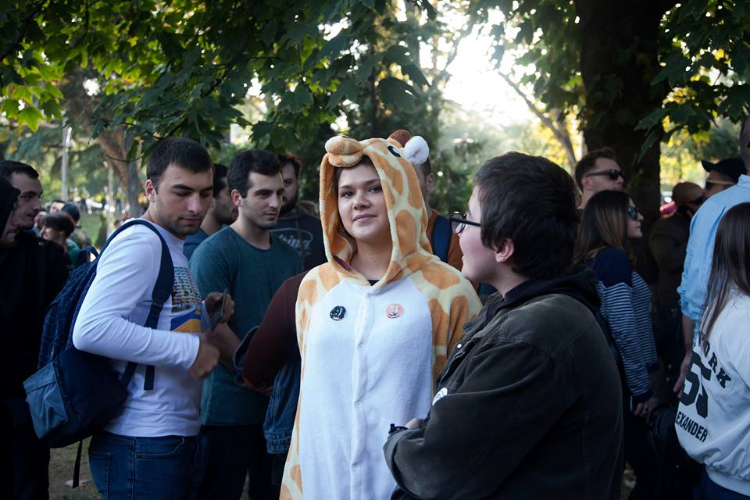 The announcement by the Girchi read that the visitors of the festival would have the opportunity to buy, sell and exchange any merchandize associated with Cannabis while the MIA has warned the organisers that these actions were illegal. Photo: Nino Alavidze/Agenda.ge

The founder of opposition party Girchi and presidential candidate for the upcoming elections in Georgia, Zurab Japaridze, has reported that two members of his party Iago Khvichia and Vakhtang Megrelishvili have been detained by police, while attending a cannabis legalization festival organised by the Girchi party itself.

The Ministry of Internal Affairs has once again warned the political party leaders yesterday that the popularisation and use of certain narcotics as well as their purchase or sale is illegal. The ministry has assessed the intention of Girchi to hold the legalisation festival as an ‘intention to commit organised crime’.

The party members started gathering at Dedaena Park recently and claim that they will organise the festival despite the warning of the government. The festival starts at 4:20 p.m. today.