Works by some of the most fascinating creatives of the classical and contemporary Italian art including Gian Lorenzo Bernini, Titian and Michelangelo will be displayed in Tbilisi for the next five months, starting with the opening of the Museum Fest today.

At the city's National Gallery venue, the series of exhibitions will open with a highlight of Titian’s celebrated piece Albertini Madonna, called an "incomparable example of the style and technique” of the artist by the Georgian National Museum.

Selected from the collections of the Academy Gallery in Venice, the painting’s display in Georgia will celebrate the legacy of the 16th century Venetian painter as a "master of colour”. 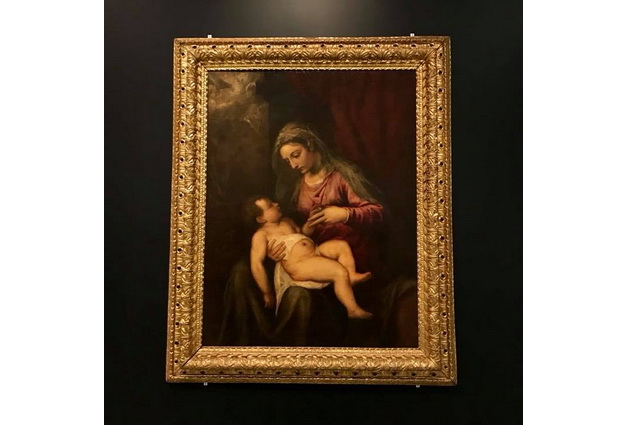 The display of the Titian piece will open the Museum Fest today. Photo: Georgian National Museum.

Museum-goers will then have another major selection of artwork opening for their enjoyment in Tbilisi, in over 40 works from Renaissance masters including Leonardo da Vinci, Sandro Botticelli, Michelangelo and Raphael.

Preserved at the Royal Library of Turin, the drawings will come on the back of last year’s GNM display of Botticelli and Michelangelo Merisi da Caravaggio, visited by over 55,000 art enthusiasts in Tbilisi.

The Renaissance-focused showcase will also be accompanied by a display on a different theme within the series.

Evidence. A New State of Art is a highlight of the contemporary Italian art ranging from the 1950s to this day, presented by the Garuzzo Institute of Visual Art.

With the works presented through the event, "generations of Italian artists” will be introduced to the audience in Tbilisi.

The extended series of exhibitions will be concluded in late summer and early fall with a selection on the Bernini School and the Roman Baroque.

Beside the program of Italian artists, the Museum Fest will feature other artistic media and creatives including photographers Henri Cartier-Bresson and Thomas Dworzak and a retrospective of Georgian artists under Soviet repressions.

The program of exhibitions will be hosted in Tbilisi as part of ongoing year-long celebrations of the 100th anniversary of the First Democratic Republic of Georgia.

The anniversary date is marked with a range of cultural and educational projects and events.