Filmmaker Rati Oneli’s feature City of the Sun about Georgia’s mining town of Chiatura was honoured with the principal prize of the DocumentaMadrid International Documentary Film Festival in Spain’s capital last weekend.

The director’s portrayal of residents of the grim industrial city was named Best Feature Film of the festival’s International Competition, as the event came to a close on Sunday.

Along with the prize, the Georgian director claimed a €10,000 award for the win, as he was welcomed on stage to speak about his debut feature documentary at the awards ceremony.

Oneli’s work was picked as the winning submission of the feature film section that also included 10 other full-length productions.

The festival summary of the film praised its "extraordinary characters”, whose "lives, dreams and destinies” were portrayed under Oneli’s direction.

Music teacher keeps demolishing the city to build a new life for himself and his family; miner-turned-actor lives in a limbo unable to make a decision between his passion (theater) and money (working at the mines); and two malnourished champion athletes have to keep running just to survive”, read the festival’s profile for the feature.

Earlier in the week, Oneli, who was based in New York from 1999-2014, detailed his experiences of filming in Chiatura in an interview for the festival.

I went to visit the city and knew that I had to actually stay and do something. And I moved because of that from New York to Georgia and I spent last three-and-a-half years basically in or around the city, making the film”.

The city itself is a character [...] I hate the idea of having beautiful or stunning backdrops. The city is not a backdrop, it is a character that speaks, that has a meaning and participates in the film”, said the filmmaker in outlining his approach. 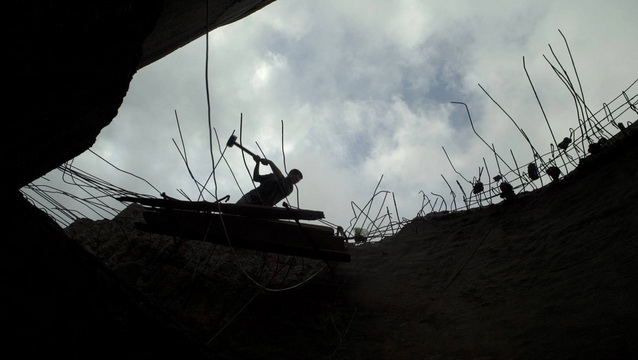 ‘City of the Sun’ was shot as a portrait of residents of Chiatura’s industrial reality. Photo: DocumentaMadrid.

The co-production between Georgia, Netherlands, Qatar and the United States was part of the 14th edition of the Madrid festival.

With screenplay by Oneli and award-winning filmmaker Dea Kulumbegashvili, City of the Sun premiered at this year’s Berlinale film festival in Germany’s capital.

The documentary’s international recognition was kick-started with the German Federal Foreign Office’s Award for Cultural Diversity at the goEast festival in Wiesbaden earlier this month.

Born in Tbilisi, Oneli specialises in Middle East studies and international affairs at Free University Tbilisi as well as Columbia University of New York. The director is currently pursuing a degree in philosophy from the European Graduate School in Switzerland.

His previous film work includes production and co-editing of Kulumbegashvili’s 2014 short Invisible Spaces, nominated for the Palme D'Or at the Cannes Film Festival.