New life is returning to a historic narrow gauge railway line that transports passengers via two small trains through the mountains between Borjomi in central Georgia to nearby Bakuriani winter resort.

Today Georgian Railway announced the trains had been "completely renovated" on the 100-year-old railway route and were ready to become operational from December 25.

It will take 2.5 hours for the renovated ‘Kukushka’ (the Russian nickname for a steam engine) trains to carry passengers the 38km between Borjomi and Bakuriani, as it navigates it was up the winding hill.

The old but restored train will give tourists and locals a phenomenal view of the forest, green valleys as it ascents through Georgia's great mountains.

We have completely renovated the two Kukushka trains in a way to preserve the original appearance. Furthermore, we have extended the service life of the trains by five years,” Dachi Tsaguria, head of Georgian Railways' public relations department told Agenda.ge. 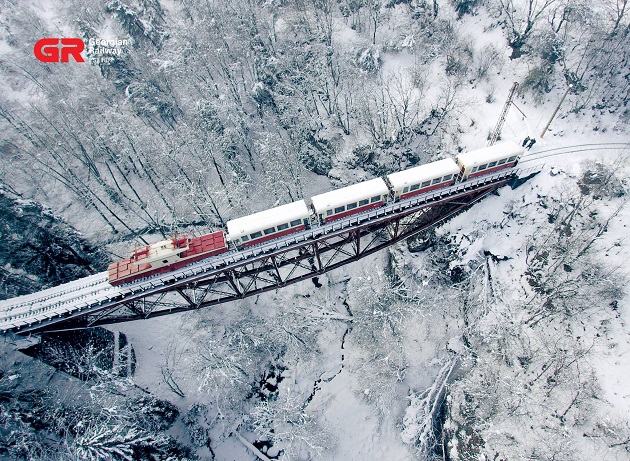 The 'Kukushka' train passes on the Eiffel Bridge that connects Tsagveri to Tsemi. Photo by Georgian Railway.

Construction of the 900mm narrow gauge line began in 1897 and because of the difficult environmental conditions, it took four years to be completely built.

The first ‘Kukushka’ train travelled on the Borjomi-Bakuriani narrow-gauge line in January 1902. To power the train through the high mountainous area, a Porter-type steam engine was imported from England.

On its journey the 'Kukushka’ train passes along a bridge designed by French engineer Alexandre Gustave Eiffel under the order of the Russian Imperial Romanov family. The bridge construction was brought to Georgia and installed over Tsemistskali River in 1902.