Georgia is uniting around a common goal – to stop gender-based violence.

Activists who believed gender equality and women’s rights were crucially important gathered in central Tbilisi today to tell victims of domestic violence they were not alone.

Similarly, corresponding manifestations were held in 22 other cities and towns across the country as the Georgian public took a stand against domestic violence against women.

"Violence against women is a crime and an offender should be punished,” was one of the most frequently heard messages at today’s gatherings.

Georgian Women’s Movement, the group who organised the peaceful protests, said no one was sheltered from violence and it could happen in all social circles without exemption.

"Physical, psychological, economic violence against women persisted on a daily basis all around us: among our friends, in our neighborhoods, in our cities.” 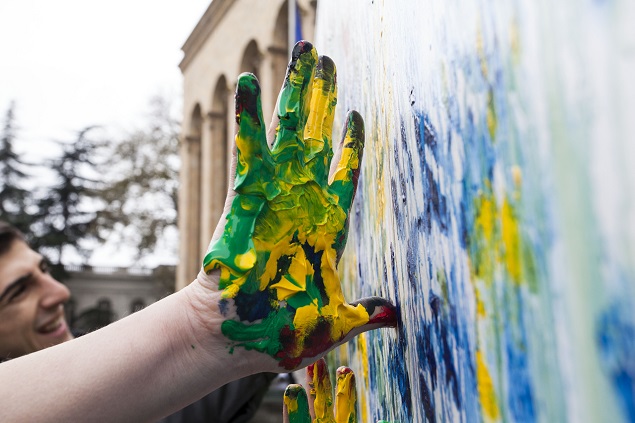 Tbilisi manifestation activists left their palm prints on a special board erected in front of the Parliament building; Photo by N. Alavidze / Agenda.ge

Latest statistics showed 25 women were killed in the first 10 months of 2014. The number of violence cases that did not result in death was much higher.

Police hotline "112” received 5,447 calls in 2013. Experts believed this did not fully reflect the exact number, as the majority of cases of domestic violence were not reported.

Today, protesters said the reaction from the state authorities to the alarming number of domestic violence cases was "unsatisfactory”, citing the fact that despite the thousands of domestic violence related complaints to police, only 212 restraining orders were issued last year.

Rally participants wanted the authorities to do more to tackle domestic violence, but they were also particularly concerned by a section of Georgian society who considered domestic violence was an "internal business of the family” and justified violence against women using patriarchal norms and traditions as their argument. 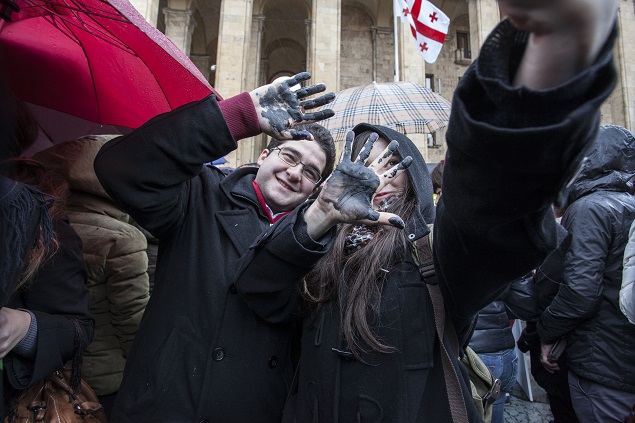 Participants of the peaceful manifestation against domestic violence against women in Tbilisi, Georgia; Photo by N. Alavidze / Agenda.ge

See all photos from the rally "In pictures".

Today’s protests were held on the same day as the wider world marked the International Day for the Elimination of Violence against Women – an initiative established by the United Nations.

Some of Georgia state officials joined in the gathering today, saying violence against women was truly an acute problem for the country.

Prime Minister Irakli Garibashvili issued a statement claiming the recent "horrific incidents” of violence against women in Georgia "clearly demonstrated how serious this problem was.”

He said violence against women was a problem that the Government could not cope with alone.

"The entire community, together with the Government, should unite against violence,” the PM said, adding respect for women was a lasting tradition in Georgia and the increased number of cases of violence against women were incompatible with this tradition. It is also "extremely shameful,” he said.

"I consider absolutely unacceptable the attempts to justify violence against women based on traditions, culture, religion or any other characteristics of our country,” he said.

"I strongly reject the idea of a public inquiry into possible provocations on the part of victims in violent crime cases. Violence cannot be justified. Violent perpetrators should be made liable before the law.”

Meanwhile, Georgia’s First Lady Maka Chichua released a video address where she said change started with "each of us” and everyone needed to realise their own responsibility.

The United States Ambassador in Georgia Richard Norland also expressed his support towards the Women’s Movement, and in his video address he said: "Real men do not beat women”. 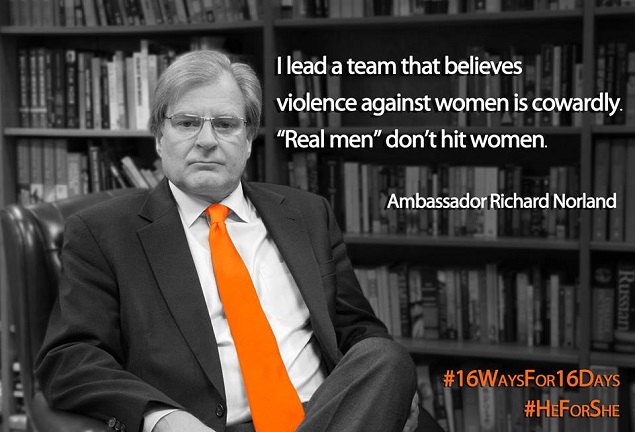 US Ambassador to Georgia Richard Norland; Photo from the US Embassy official Facebook page

On another note, a seminar on domestic violence was held for Georgian police officers at the National Police Academy today. The seminar was taught by Michael Wilson, a police adviser from the US Embassy’s office of International Narcotics and Law Enforcement Affairs and aimed to help about 70 Georgian law-enforcement professionals to improve their interview and interrogation skills when interacting with victims, perpetrators and witnesses of domestic violence.

The peaceful protests across Georgia ended with a decision to not turn a blind eye to violence against women. The final message of the protest was: "Together we can make a change!”