Andrii Kasianov, the Ukrainian Charge D'affaires in Georgia, was on Wednesday summoned to the country’s foreign office for explanations over his recent interview that suggested a possible evacuation of Ukrainian citizens from Georgia due to possible “threats” from an “influx” of Russian nationals to the country.

The development followed Kasianov’s interview for the European Pravda on Tuesday, in which the diplomat said his office would consider the evacuation of citizens if a “mass influx” of Russian nationals to Georgia following a potential resumption of direct flights with Georgia created “risks to their lives and safety”.

The Georgian Foreign Ministry on Wednesday confirmed with the local media the comment had been the “single topic” of the discussion at the diplomat’s meeting with the body’s Deputy Foreign Minister, while Kasianov claimed before the meeting “a wide range of bilateral questions” would have been discussed.  The diplomat left the body without any comments following the meeting.

In his remarks during the day, the Ukrainian official also urged local media to read the “full and original versions” of his interviews to “prevent misinterpretations”. 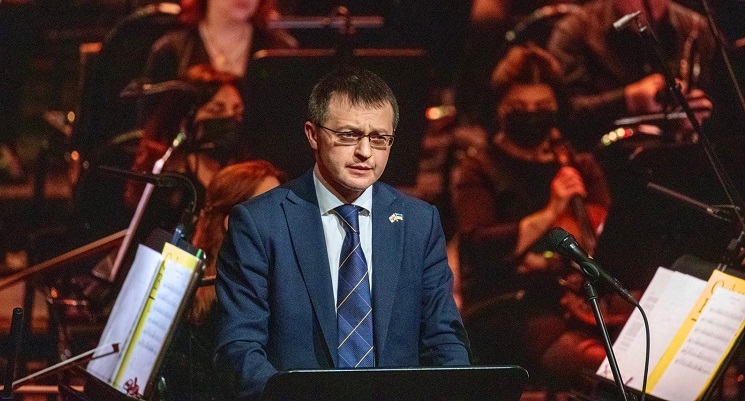 Kasianov made no comments after his meeting in the Georgian foreign office. Photo: Andrii Kasianov's press office.

The interview, in which Kasianov also said his Embassy could request international support to evacuate Ukrainian citizens from Georgia if necessary “via land transport”, came following remarks by the Russian Foreign Minister Sergey Lavrov, who on January 18 said he hoped flights with Tbilisi, unilaterally suspended by his Government in 2019, could be restored.

Irakli Kobakhidze, the head of the Ruling Georgian Dream party, on Tuesday called the Ukrainian envoy’s comments “shameful” and said Kyiv would have had to evacuate its citizens from Georgia if the Georgian Government had provided weapons to the country - as requested by Ukrainian authorities - and thus become involved in the ongoing conflict with Russia.

He also said the resumption of direct flights with Russia, cancelled by the decision of Russian President Vladimir Putin in June 2019, in response to protests in Tbilisi sparked by an incident related to a presence of Russian MPs in the Georgian Parliament, was “up to the Kremlin” and not Georgian authorities.