The pandemic-hit years have impacted the Georgian publishers and booksellers through reduced sales and released books, with the first year of Covid-19 resulting in a 25 percent reduction of new releases and the past two years showing a 40 percent decrease in book sales, a new study of the sector shows.

Released  on Tuesday, the study of the local market was commissioned by the Georgian Publishers and Booksellers Association and the Writers' House of Georgia from the Tbilisi-based Analysis and Consulting Team (ACT) company.

Involving a range of data, the report shows tendencies among readers, for bookshop sales, and publisher statistics. While extending back beyond 2020 in some figures, the particularly notable sections involve the numbers reflecting effects of the pandemic over the past two years.

The study shows a reduction both in the number of book titles sold in 2020 and 2021 - with a 17 percent decrease - as well as in the total number of sales, with readers purchasing 40 percent less books in the same time period. Reinforcing the data reflecting impacts of the coronavirus, a quarter less new titles were released in 2020 compared to the year before.

[The data from the study] is vitally important for the local publishing sector to gain an understanding of market trends and evaluate its own achievements and shortcomings [...] as well as for us to be able to introduce various figures on the Georgian book market to crucial international organisations like the World Intellectual Property Organization and International Publishers Association

Dynamics in the figures from the first year of Covid-19 also indicate that, despite the 25 percent fewer books sold during 2020, income from sales only decreased by 5 percent. Professionals from the two commissioning organisations have pointed to book price increases over the recent years as the likely cause for the discrepancy. 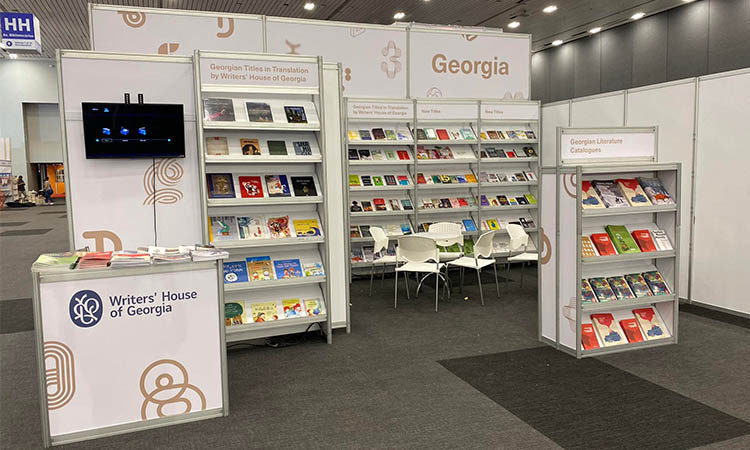 The report features a variety of data, including participation of Georgian publishers in international fairs. Photo via Georgian Publishers and Booksellers Association.

The ACT study also takes a look at readership of books on the local scene, and shows 50 percent of adult population in six cities - capital Tbilisi, western cities of Kutaisi, Batumi and Zugdidi, Gori in central Georgia and Telavi in the east of the country - as reading books "with varying frequency", with the remaining 50 percent not having read a single title in 2020.

Reflecting the overall demographic distribution in the country, literature enthusiasts are disproportionately represented in Tbilisi (51.8 percent), compared to the rest of the country (45.4 percent).

Women are shown in the report to represent a significantly larger portion of readership, with 59.3 percent spending time on books, compared to 38.4 percent of men. Young respondents also comprised a larger section of book enthusiasts in the population, with the tendency of reading decreasing from 65.3 percent to 38.3 percent with age.

In remaining data released as part of the report, four publishing houses were identified as leaders of the Georgian market, with Palitra L Publishing, Sulakauri Publishing, Intelekti Publishing and Artanuji Publishing noted as significant players on the scene.

Comprising the years 2016-2020, the ACT study follows the previous research of the local book market from 2015, and was carried out over the period of a year.