A display of sketches and drawings on Georgian social and cultural life from the 17th century, created by Theatine cleric Cristoforo Castelli, was hosted at the Georgian National Museum on Wednesday to mark the occasion of three decades of diplomatic relations between the two countries.

Celebrated as works that contributed to the introduction of the Georgian society of the era to Europe along with travel notes, drawings and other material by European travellers across the centuries, the works of Castelli, who resided in Georgia between 1631-1654, were on display at the GNM network's Museum of Georgia in downtown Tbilisi.

Set to run through late June, the exhibition brings together 50 reproductions of sketches and drawings of Georgian ruling classes, noble families and ordinary residents, in addition to illustrations of entertainment events, everyday scenes and European missionaries' residences in the country.

[Castelli] contributed so much to the formation of [...] a greater knowledge about Georgia [in Europe] and [...] still passes us a testimony of invaluable historical and cultural value: an illustrated diary of almost a quarter of a century lived in the Country

- Embassy of Italy in Georgia 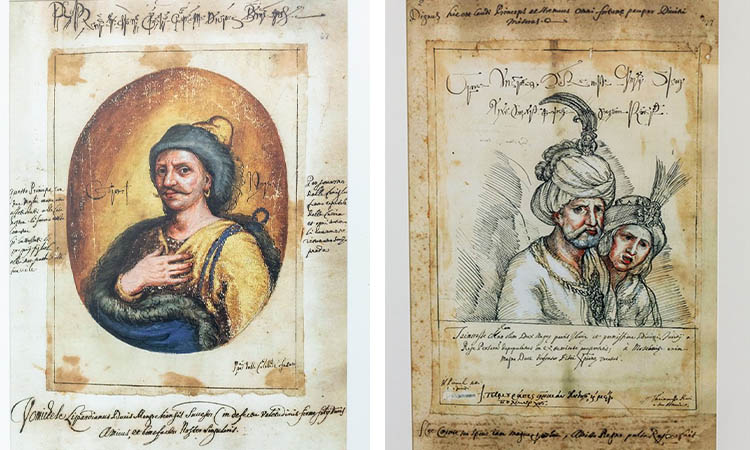 Portraits of Georgian nobility as well as ordinary residents hold a prominent place in sketches and drawings by Castelli. Photo via Embassy of Italy in Georgia.

Many of the sketches portray members of noble families in Georgia's west, including at the historical Zugdidi residence of the local nobility, as well as drawings highlighting the typical costumes and accessory elements worn by Georgians during Castelli's stay in the country.

Described as bearing "significant ethnological and historical interest" by the Embassy, the original works of Castelli - many of which were lost in his return to Europe and painstakingly restored by the Father who represented the Catholic Church's Congregation of Clerics Regular - are preserved at the Municipal Library of Palermo in Italy.

Along with the display of the works, a trilingual catalogue on Castelli and his sketches of Georgian life was unveiled at the event in Tbilisi.

The exhibition's celebration of the 30th anniversary of Georgian-Italian diplomatic ties saw addresses to the audience at the National Museum by Georgian and Italian officials and dignitaries, including GNM General Director David Lordkipanidze and Enrico Valvo, the Ambassador of Italy to Georgia.

The display follows a range of exhibitions co-hosted by Italian cultural institutions and the Embassy together with the GNM over the recent years - ranging from the first display in Georgia about the history of the ancient city of Pompeii, an anniversary exhibition of Leonardo da Vinci, and displays of Roman sculpture and mosaic art.

The Museum of Georgia will host visitors for the exhibition Cristoforo Castelli and Georgia through June 30 at 3, Shota Rustaveli Avenue in the capital.