Representing the largest opposition party, the group was holding the demonstration with a request for Saakashvili’s transfer abroad for treatment, and had set up tents in front of the regional Government House of Adjara, blocking an adjacent street.

Police later removed the tents, which led to a confrontation between the law enforcement and protesters. The Ministry said the tents' removal was attempted when the number of demonstrators had decreased and their blocking of the street was no longer justified, with officers giving them advance warning for vacating the area.

Despite “numerous calls and warnings,” the protesters had rejected the requests and “continued illegal actions,” the statement said.

Elguja Bagrationi, a member of the UNM, said he had notified the Batumi City Hall about the rally, informing them the street would be blocked by participants. He added Deputies of the Supreme Council of Adjara and members of the City Council were among the detained. Police have already released two individuals from the arrested group. 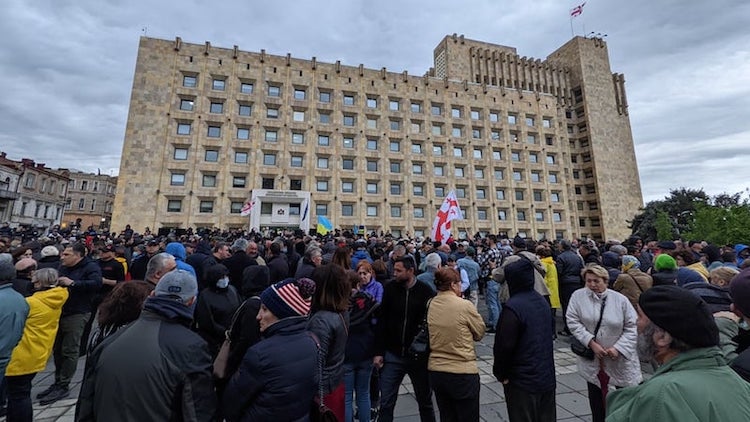 The demonstration in Batumi was preceded by rallies with the same demand in the capital of Tbilisi on Thursday and in the city of Rustavi, where the former President is imprisoned, on Friday. Photo: Netgazeti.ge

The demands follow comments by a medical council appointed to observe Saakashvili’s condition in detention over “significant deterioration” of his health over the recent weeks, with the conclusions rejected by state authorities and officials.

A report by the council, formed by the country’s Public Defender, said the former President had developed anorexia and was suffering from a lack of proteins as a result of a Post Traumatic Stress Disorder, recommending a “timely, complex neuro-psychological and physical rehabilitation.”

Saakashvili is serving a sentence for abuse of power stemming back to his time in office between 2004-2013. He was arrested after his clandestine return to Georgia ahead of municipal elections in the country last fall. The former President, now a citizen of Ukraine, had been convicted in absentia on two counts of abuse of power and sentenced to six years in prison.

He ended a 50-day hunger strike on November 19, after his transfer to the Gori Military Hospital, but was returned to the detention facility following a course of treatment on December 30.