Eleven years have passed since the November 2007 political crisis in Georgia, which nearly ended the rule of the United National Movement leadership in the country.

November 2007 mass rallies against then-President Mikheil Saakashvili and his government, the brutal dispersal of peaceful protesters and an attack on Imedi TV are still relevant today, as former Georgian top officials have been charged for the incidents of 2007.

Demonstrations against the UNM government kicked off on 28 September 2007 and reached up 100,000 people by 2 November, when they gathered in front of the parliament building in central Tbilisi. 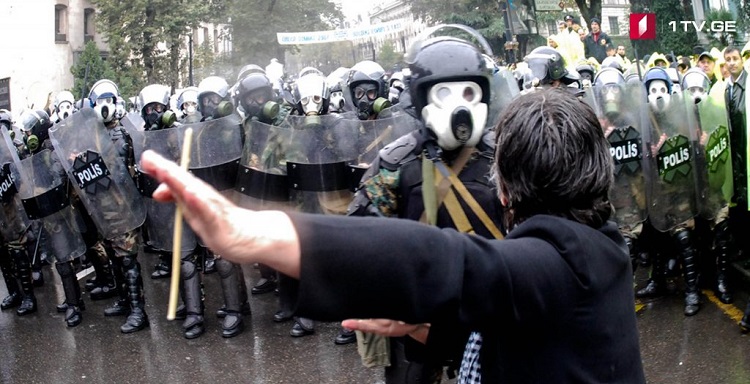 A man standing in front of the riot police on 7 November. Photo: 1TV.

Protesters urged then-president Mikheil Saakashvili to step down. The protests were organised by a coalition involving major opposition political parties and were supported by billionaire Badri Patarkatsishvili, who owned Imedi TV that time.

On 7 November, 2007 a series of anti-government protests took place across Georgia and ended with protesters being dispersed by police who used tear gas and water cannons.

Saakashvili accused Russia and Patarkatsishvili of being involved in an attempted coup. He declared a nationwide state of emergency that lasted for 15 days.

Also on 7 November, riot police attacked Imedi TV while a news programme was being broadcast live on air. Police officers in masks and carrying assault rifles were seen sealing off the office. The broadcaster, which the then-government claimed was biased and pro-opposition, was subsequently switched off.

International organisations evaluated November 2007 as the worst political crisis in Georgia since the Rose Revolution in 2003.

Tbilisi Mayor Kakha Kaladze has stated that 7 November became the beginning of the end for the UNM leadership.

And we, the current state leadership, feel a huge responsibility to the Georgian  people not to allow the return of any regime in the country,” he said.

The presidential candidate of the UNM Grigol Vashadze admitted that 7 November was the “gravest mistake” of the previous state leadership which should be used as an example for any government in Georgia.