CoE report denounces ‘backsliding’ for LGBTI rights in member states, including in Georgia

The recent report in the Council of Europe has denounced a ‘backsliding’ observed in CoE member states for the rights of lesbian, gay, bisexual, transgender and intersex (LGBTI) persons, including in Georgia.

The report on The role and responsibilities of local and regional authorities in the protection of LGBTI persons was presented yesterday at the Council of Europe’s Congress of Local and Regional Authorities Current Affairs Committee in Strasbourg.

The document mentioned an ‘increasing contestation of LGBTI persons’ rights, recognition and identity’.

It examines how this negative trend has affected the lives of LGBTI people, paying particular attention to the health and well-being of LGBTI youth. The report also presented good practices in promoting and defending rights of LGBTI people at local level all over Europe,” said the CoE press office.

The report reads that ‘despite efforts to combat hate speech, it remains a problem throughout Europe’, including in Georgia.

The report also said that in February 2019, an MP for the Alliance of Patriots of Georgia party, submitted an initiative to remove ‘sexual orientation’ and ‘gender identity’ from eight laws that banned discrimination. 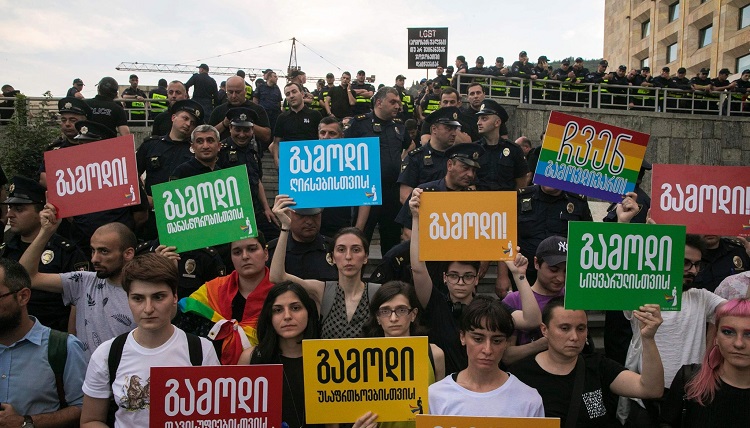 Supporters of Tbilisi Pride standing at the administration building of the government of Georgia in 2019, urging people to join them. Photo: Tbilisi Pride.

It was not adopted but even when not adopted, legislative proposals to remove protections for LGBTI people contribute to a hostile environment for LGBTI people. The Tbilisi Pride march in 2019 had to be cancelled due to fears of far-right groups’ attacks as the organisers abstained,” said the report.

The report says that ‘shrinking civil society space has been increasingly present’ in Europe in the past ten years, with governments such as Armenia, Azerbaijan, Croatia, Georgia, Hungary, Macedonia, Moldova, Poland, Russia, Slovakia and Ukraine restricting the work of civil society and human rights defenders, where civil society space is shrinking, ‘via measures often specifically targeting LGBTI organisations.’

As for good practice the report said that on the occasion of 17 May, International Day against Homophobia, Transphobia and Biphobia, in 2018, the Mayor of Tbilisi stated that “everyone has the opportunity to express their opinions in our country and city. The fact that certain groups have their own views is a normal process. This is part of democracy, so nobody's rights can be restricted.”