Nika Melia, the chairman of the United National Movement opposition party, has given the government 24 hours to ensure the imprisoned former president Mikheil Saakashvili is moved from prison to a private clinic, as law enforcement made arrests at the opposition's rally outside the detention facility in the city of Rustavi on Saturday.

Melia said at the protest the opposition would hold a mass rally on Freedom Square in capital Tbilisi on Monday evening if the ruling party did not ensure the high-profile inmate of the No 12 prison facility was moved to a civilian clinic. 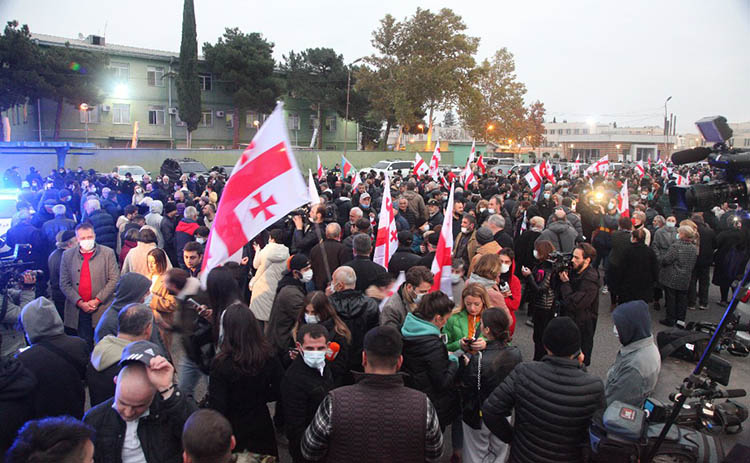 The opposition rally launched in the evening outside the Rustavi facility to demand Saakashvili's admittance in a private clinic instead of the prison's medical centre. Photo: Nino Alavidze/agenda.ge.

The declaration reflects the demand the opposition has made over the recent weeks, alleging neglect from the state institutions watching Saakashvili's health deteriorate due to his hunger strike in prison. Justice and penitentiary officials have countered the claim by making statements on the former president receiving adequate care, and questioning whether he actually is on hunger strike.

The Saturday rally outside the No 12 facility saw at least one arrest made by the police, with Radio Free Europe/Radio Liberty's Georgian service reporting the individual to have been removed by the law enforcement for insulting prime minister Irakli Garibashvili, former PM Bidzina Ivanishvili and members of the country's government.

In a separate incident, a man was pronounced dead at the Rustavi Central Hospital after losing consciousness at the rally, with participants of the protest alleging a late response from the ambulance, and the central hospital director telling RFE reporters the individual had died before the arrival of his body at the medical venue.