Tsulukiani publicly cited Gvaramia’s phone number at a recent plenary session, which the EU Ambassador to Georgia Carl Hartzell called ‘unethical’. In return, Tsulukiani requested to hold a separate meeting with Hartzell, later telling journalists that the ambassador’s comment had been his personal view not of the EU. 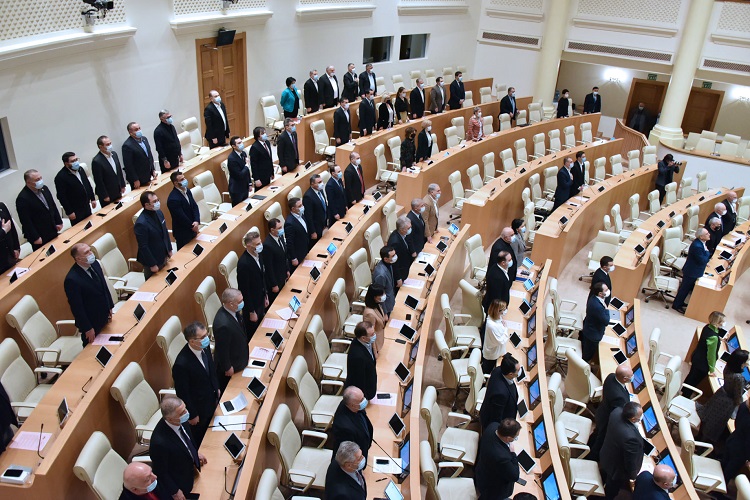 The tenth convocation of the Georgian parliament opened its Spring session on February 2. Photo: Parliament of Georgia/Facebook

In their joint letter sent to Georgian Parliament Speaker Archil Talakvadze, the six MEPs said ‘it is regrettable, very unpleasant, and unethical when the fundamental right of privacy is carelessly breached in the walls of your institution’.

They also added that ‘it is equally regrettable and simply in bad taste when the EU ambassador’s accurate assessment of the events prompts a request of justification from your colleagues’.

Ambassador Hartzell, who during the last months has spared no efforts in making sure that Georgia has a functioning, pluralistic and democratic parliament, does not merely express ‘his personal opinion’ but voices those fundamental EU values that your country also claims to aspire to”, the MEPs said.

Hoping soon to see ‘a transparent and pluralistic parliament just like Georgian voters intended it to be’, they meanwhile addressed Speaker Talakvadze that ‘in the interest of Georgia as a whole, it is imperative for all political parties to act in good faith and reinvigorate honest efforts in search of a political solution’.

In this process, there should be no place for polarising language, personal attacks, and inciting harassment. It is your mandate as a Chairperson of the Parliament to ensure a high level of decorum in the plenary hall, which will allow for constructive debates and effective oversight on legislation”, the letter further reads.

It also notes that when during their recent visit to Brussels the ruling party MPs ‘presented a very ambitious goal of applying for EU membership in 2024’ the MEPs ‘kindly reminded’ that ‘ambitious political goals require equally ambitious democratic standards’.