The UNM presented mayoral candidates in 24 more municipalities of Georgia for the upcoming local elections yesterday.

Head of the UNM Nika Melia said that their municipal election candidates are ‘leaders of the referendum.’

Melia also stated that cooperation among opposition parties is important and that therefore the UNM would support joint candidates in several Georgian municipalities during the self-government elections.

Leader of European Georgia Giga Bokeria nominated two joint oppositional mayoral candidates in the western municipalities of Khoni and Terjola and presented nine candidates on behalf of his party in other Georgian regions. 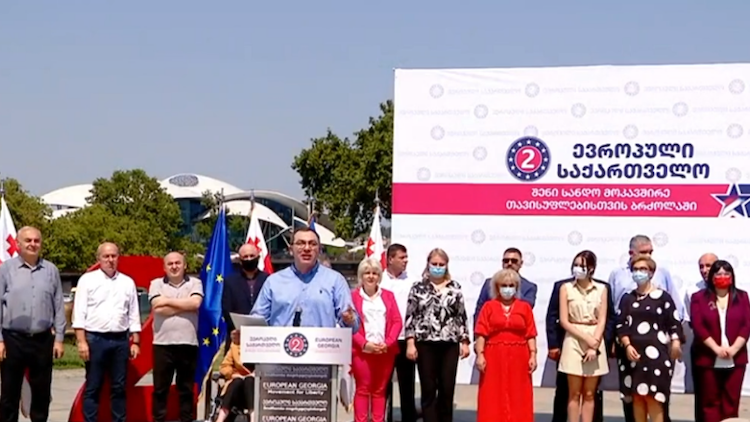 European Georgia, which received five of 60 opposition seats in the parliamentary elections 2020, also nominated a joint oppositional candidate for vice-mayor in Rustavi and six candidates for Sakrebulo (city council) Chairman out of which three are joint candidates nominated by several opposition parties. Photo: Netgazeti.ge.

In late July the ruling Georgian Dream (GD) party backed out of the April 19 EU-mediated agreement which put an end to the political crisis in Georgia caused by parliamentary elections 2020 and proposed electoral and judicial reforms, due to UNM’s refusal to join the agreement.

Per the agreement the GD had to hold a snap election if it received less than 43 per cent of votes in the upcoming local elections however the ruling party stated that early elections will not take place until the scheduled one in 2024.

The UNM presented its candidates for 29 municipalities last week where Nika Melias’s father Anzor Melia was nominated for Zugdidi mayor in western Georgia.

The party did not nominate majoritarian candidates in Tbilisi in support of several opposition parties’ joint candidates as Nika Melia was put forward for the post of Tbilisi mayor, while Droa movement founder Elene Khoshtaria has been nominated for City Council (Sakrebulo) head.