EU Special Representative for the South Caucasus and the crisis in Georgia Toivo Klaar has discussed the situation in the country and the region with the Georgian president, prime minister and parliament members during his visit to Tbilisi.

During the meeting with President Salome Zurabishvili earlier today the parties spoke of the recent ruling of the European Court of Human Rights (ECHR), which says that Russia violated several articles of the European Convention on Human rights during the 2008 conflict in Georgia and carried out ethnic cleansing of Georgians. 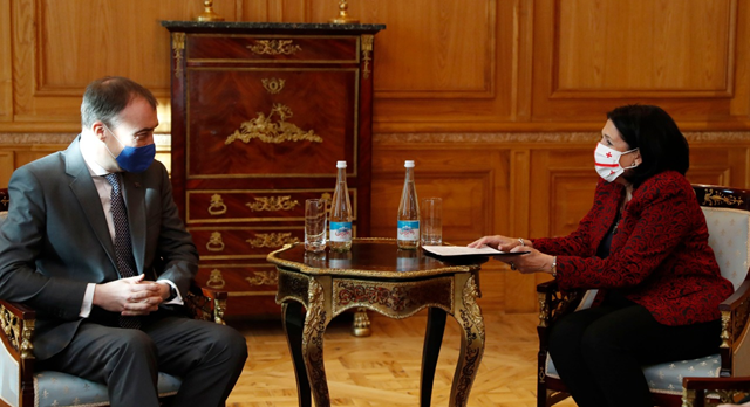 They also focused on the human rights situation in the Russian-occupied Georgian regions of Abkhazia and Tskhinvali (South Ossetia) amid the coronavirus pandemic. Photo: President.gov.ge

Klaar has also tweeted that he had a 'very good meeting' with PM Giorgi Gakharia yesterday 'on security developments in Georgia and the South Caucasus'.

Held a productive meeting w/ @ToivoKlaar. Discussed the security challenges in the region, difficult humanitarian situation in occupied regions, @GovernmentGeo policy towards the occupied territories & the need for more active role of the #EU & other strategic partners. pic.twitter.com/E8IbYXhZ1n

Yesterday Klaar held a meeting with the parliamentary chair and the first deputy chair of foreign relations committee Nikoloz Samkharadze and Giorgi Khelashvili, respectively, as well as the chair of the EU Integration Committee Maka Botchorishvili.

Very interesting discussion with the EUSR @ToivoKlaar about peaceful resolution of conflicts in the South Caucasus and the role of the EU. pic.twitter.com/L6aTP8v8aG

The EU appointed Toivo Klaar its Special Representative for the South Caucasus back in 2017, who is also one of the co-chairs of the Geneva International Discusisons.