US Ambassador Degnan: Georgian parliament has power to pause election of judges

US Ambassador to Georgia Kelly Degnan says that the Georgian parliament has the power to temporarily suspend the election of new judges to the country’s Supreme Court.

The US Embassy is but one of Georgia’s many partners that have called for a moratorium on the nomination of judges by the Georgian High Council of Justice for the Supreme Court.

International partners of Georgia, NGOs and the opposition have asked parliament to pause the process until the implementation of the April 19 EU-mediated agreement which proposes ‘large, inclusive and multiparty discussions on how the Georgian justice system should be improved.’

Degnan said that the US and international partners have supported improvements in the Georgian justice field for 25 years ‘because the rule of law and a strong court system are preconditions for Georgia’s NATO and the EU membership.’ 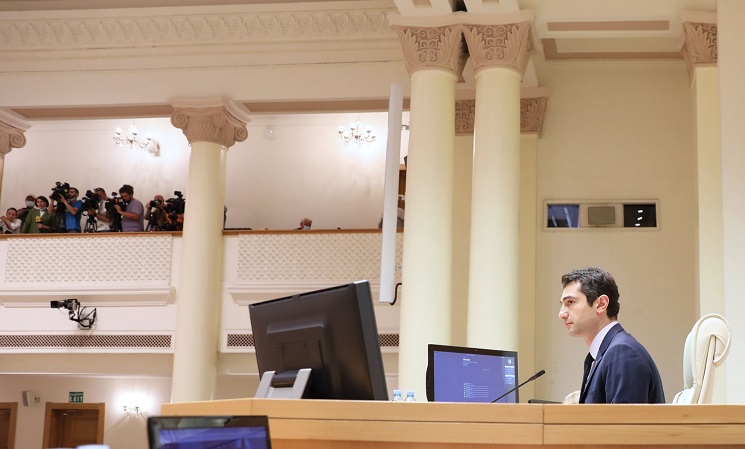 The High Council of Justice has already selected candidates for Supreme Court. Now it is up to the parliament to vote them on. Photo: parliament of Georgia press office.

She says that the April 19 agreement which was proposed by the European Council President Charles Michel and signed by the majority of Georgian political parties to resolve the several-month political crisis in the country, ‘is a roadmap’ for major improvements in the Georgian judiciary.

310 Georgian judges released a joint statement yesterday in which they condemn what they say is a ‘politically motivated and unhealthy process which aims to discredit the Georgian judiciary.’

The letter by the judges came in response to statements from the opposition, NGOs and foreign embassies which call for a moratorium on the election of new judges to the Georgian Supreme Court as well as new members in the High Council of Justice (HCJ), in an independent body which selects and appoints judges around the country.

The Georgian parliamentary opposition parties say that if the parliament approves candidates for the Supreme Court it will be a violation of the EU-mediated agreement.

They and NGOs state that HCJ is being run by a clan of judges.

The ruling Georgian Dream party said that they will support the approval of Supreme Court judges by parliament because the state legislature adopted major judiciar reforms before signing the EU-mediated agreement.

The approval of the judges will need at least 76 votes in the 150-member parliament, while the ruling party MPs occupy 90 seats there.