Tbilisi City Hall has announced it will launch a rehabilitation effort for two of the capital city's cultural heritage monuments, with 19th century-built National Palace and Cadet Corps venues to be safeguarded starting this year.

Located along the central Shota Rustaveli Avenue, the two buildings will go under a two-year, 25 million GEL (about mln/€7.9mln) project to bring them back from disrepair and neglect, mayor Kakha Kaladze announced at a government meeting on Wednesday.

A thorough work for reinforcing and repairing the buildings themselves, in addition to upgrading or restoring their decorative elements, has been planned by the city authorities and is expected to conclude in 2021. Kaladze called the current state of the monuments "critical" and "grave" in his comments.

The National Palace, previously known as The Youth Palace - and in Soviet Union years as The Pioneers' Palace - will have its walls and foundation reinforced, rooms renovated and decorative halls conserved. Doors and windows of the venue will be replaced for a "complete rehabilitation" effort.

Located on Rustaveli Avenue, the National Palace is a venue of historic importance due to its connection to the First Democratic Republic of Georgia as well as the 19th century era of the capital city. Photo via National Palace.

Originally built in the early 19th century, the building went under reconstruction based on a plan by German architect Otto Simonson - known for his work on other major buildings of the Georgian capital during the era - in the middle of the century.

Located at 6, Shota Rustaveli Avenue, it was built to serve as the residence for Tsarist Russia's imperial viceroy to the Caucasus, before it became a historic venue where the independence of the First Democratic Republic of Georgia was proclaimed in 1918.

The same building became the tribune for governments of Armenia and Azerbaijan, the two other nascent modern states of the South Caucasus, to announce about their break from Russian control. It was also the location of the adoption of the first Georgian constitution on February 21, 1921, just four days before invading Soviet armies crushed the independence of the republic.

The National Palace currently functions as a venue for providing extra-curricular education for youth aged between 6-26, with around 4,500 students registered for classes in music, languages, folklore, theatre and more. 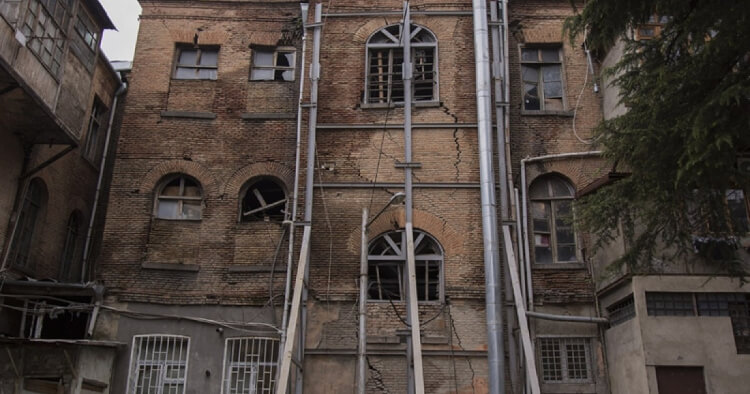 The Cadet Corps building currently houses residential flats and has become subject of extensive damage and disrepair due to decades of neglect. Photo via at.ge.

Found at the intersection of Revaz Tabukashvili and Revaz Laghidze streets - a block down from the Rustaveli Avenue - the Cadet Corps is another historical building that has fallen in a major state of disrepair. The city mayor called its state "impossible for residence", with his mayoral campaigning programme in 2017 involving a promise to restore the venue.

Built in 1860, the Cadet Corps served to train sons of noble families as future officers in the Imperial Russian army and was led by high-ranking military commanders. Currently housing residential flats, the building's physical state has become subject of requests addressed to the city hall for repairing major cracks in its walls and other damage that has emerged throughout the monument.

Kaladze said the conservation work on the two buildings would herald 2020 as a "particularly important year" for infrastructure projects, adding the city hall had "many interesting" efforts to announce.