Opposition politicians have gathered in front of the parliament of Georgia in central Rustaveli Avenue to protest the results of the Central Election Commission (CEC).

Unanimous in their demands for repeat elections, the parties which have overcame the mandatory 1% threshold, including the United National Movement, Euroepan Georgia, Strategy Aghmashenebeli, Lelo for Georgia, Labour Party and Girchi, accuse the CEC of falsifying elections on behalf of the ruling party. 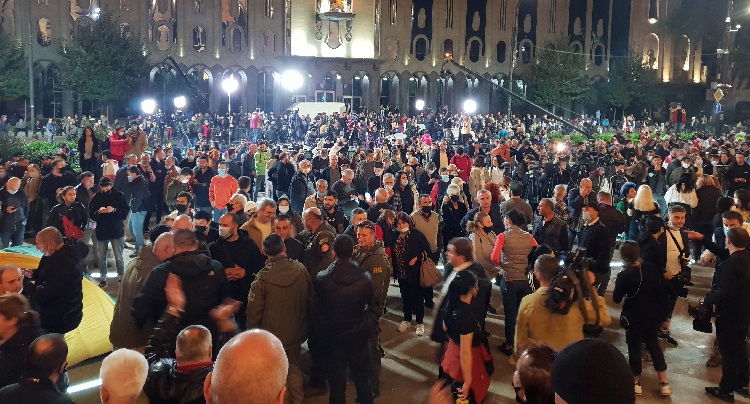 The UNM majoritarian candidate for Gldani constituency Nika Melia took of the monitoring bracelet in front of his supporters at Rustaveli Avenue today, saying 'this is the symbol of injustice'.

Melia, who was charged with incitement to violence during the Tbilisi protests last year, has to wear an electronic bracelet to be monitored.

Calling it a 'violent bracelet' Melia said he refuses to wear it anymore. "Will I be imprisoned, or will I be in a war together with you in coming days, the nation will win", he said.

Isani constituency Khatia Dekanoidze who is also among the opposition politicians who cleared for the run off, said she will stay in front of the parliament tonight in protest. 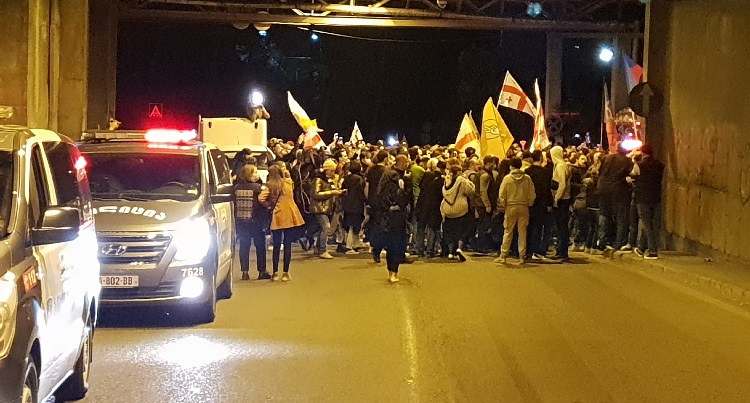 Having marched to the residence of the ruling party leader Bidzina Ivanishvili, the opposition politicians and their supporters said they wanted to make noise and make Ivanishvli hear ‘the voices of angry Georgians’. Photo: Nino Alavidze/Agenda.ge

The ruling Georgian Dream party received over 48% of votes in yesterday’s parliamentary elections, followed by the United National Movement with 27%.

Georgian Dream candidates are winning the majoritarian race in the first round of elections in 14 of 30 majoritarian constituencies.

However, a second round of elections is expected to take place in the remaining 16 constituencies, including in all of the eight constituencies in Tbilisi.

Meanwhile, the ruling party leader Irakli Kobakhidze has welcomed the fact that a total of nine parties have overcome the election threshold and will form a pluralistic parliament. He meanwhile noted that the opposition eventually join the new parliament.